tonyclark, Author at The Tidewater News

Staff Report — Courtland According to officials, all eight students transported to Southampton Memorial Hospital during todays medical emergency are alert and responsive. According to ... Read more 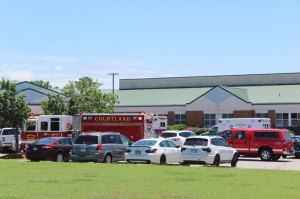 COURTLAND As of 1:19 p.m. on Tuesday, Southampton High School has been placed on lockdown. The county sheriff’s department and Virginia State Police are on ... Read more

Tornado watch in effect for Western Tidewater until 9 p.m.

According to the National Weather Service, a tornado watch has been issued for our region. The current alert lasts until 9 p.m. Thursday. A tornado ... Read more

Southampton County and the City of Franklin have recently held discussions regarding financial support for Cypress Cove Country Club, with each locality considering a $30,000 ... Read more

FRANKLIN – A significant number of business and residential customers of Charter Communications in Western Tidewater remain without phone, cable and internet service as of ... Read more

Ivor — According to VDOT, Rt. 460 is closed in both directions due to an accident a half mile west of Ivor. Read more

Caitlyn Reid Joyner, the 17-year-old Franklin girl who was reported missing on Friday evening, has been located in Brooklyn, New York. She was in police ... Read more

Due to inclement weather and dangerous road conditions, The Tidewater News’ offices will be closed Tuesday. Read more