COURTLAND
The visit of Hurricane Matthew on Oct. 7 caused the postponing of the Southampton Academy Homecoming until Friday, and with it a football game against the Eagles of Rocky Mount Academy.

Because of the limited number of teams in the Raiders’ conference, certain teams have to play each other twice during the season. The Raiders therefore have to play the Eagles twice and in an earlier game against the Eagles, the Raiders defeated them 64-12.

Coach Dale Marks said after the game, “Rocky Mount has a good team, but both times that we have played them it has gotten out of hand for our side.”

In continuing their dominance over the Eagles, the Raiders took them out in due form as they easily defeated them 48-13.

The Raiders seemed to be on fire on Friday night as they jumped out quickly in the opening minutes of the first quarter with a 14-yard touchdown run by quarterback Sam Rose. But Rose wasn’t finished in scoring, as he added three more touchdowns all in the first half of play. The Raiders ended the first quarter being ahead 20-0 over the Eagles.

In the second quarter, the Raiders added 22 more points on the scoreboard.

“They knew we were going to run the ball and when you can do that, we will throw one every once in a while to loosen them up,” said Marks.

Therefore, Rose going to the air connected on a 77-yard touchdown pass to Christopher Rabil in the second quarter. The first half ended with the Raiders up easily 42-0.

Marks gives much compliments to his coaching staff in preparing the players for the games played each week.

The Raiders rushed for a total of 285 yards during the game. They were lead by Sam Rose with 131 yards and four touchdowns and Jalen Myrick with 116 yards and two touchdowns. Tyler Dodson also added one touchdown for the Raiders. In passing, Rose was 6-9 for 129 yards and one touchdown.

The Raiders are now 10-0 in the conference and will be going into their first round of play-offs on Friday, Nov. 4, at Pillow Field.

After the introductions, Mason Parker Pope was announced as the 2016 Southampton Academy Homecoming Queen. 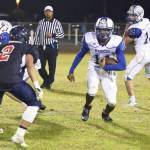 Running back Jalen Myrick looking for an opening 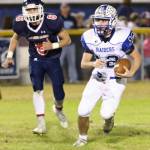 Quarterback Sam Rose keeps the ball and looks for a hole to run through. 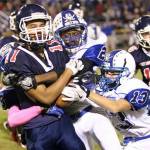 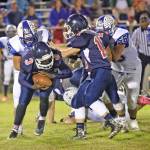 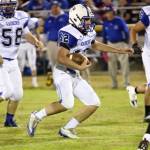