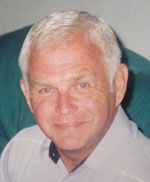 He was born in 1941 to the late Aryman Gerald Miller Sr. and Mary Foster Miller.

Jerry was preceded in death by his sister, Judith “Judy” Miller Vaughan.

The graveside service will be on Monday, Jan. 2, 2017, at 2 p.m. at the Southampton Memorial Park Cemetery in Franklin, Virginia, with Rev. Ben Duffey officiating.

Online condolences may be made to the family at www.askewfs.com.