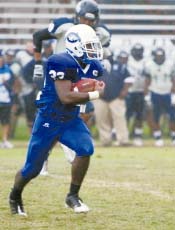 The Hawks put up just seven points and 146 yards of offense in the game to pick up their third loss of the season. Chowan miscues accounted for 119 yards on 14 called penalties, and the Rams scored 14 points in the first five minutes of the game to shut the door early on the Hawks.

Chowan’s lone score came with 3:53 to play in the second quarter when Elliot Smalls ran one in the end zone for a touchdown. Joey Gargiulo made good on the kick to get the Hawks seven on the board.

Smalls worked hard for his 82 total rushing yards. Ryan Simpson got the start under center where he threw for 63 yards on six of 14 completions.

Chowan will host Virginia State University on Saturday, Sept. 25, in their first home game of the season.