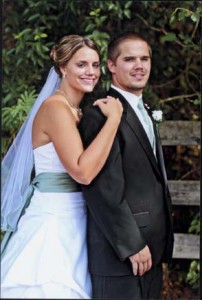 Mary Jo Findley, friend of the bride, served as mistress of ceremonies.

April Carr, sister of the bride, served as matron of honor.

Lindsey Drake, friend of the bride, served as maid of honor.

Bridesmaids were Kimberly Gray, friend of the bride, and Erin Gunn, sister-in-law of the bride.

Brandon Smith, friend of the groom, served as best man.

Groomsmen were James McGhee, Kevin Bradshaw and Will Haney, all friends of the groom.

Kevin Gunn, brother of the bride, and Jonathan Carr, brother-in-law of the bride, were responsible for lighting the candelabras and the aisle runner placement.

Logan Carr, nephew of the bride was ringbearer.

Jade Harrison, niece of the groom, was flower girl.

Guestbook and program attendants were Hillary Gunn, cousin of the bride, and Desiree Cantrell, friend of the bride.

Soloist Kelly Drake sang “Lost in This Moment” and “A Moment Like This.”

Hatfield Catering Service provided the meal for the reception at Sebrell Community Center.

Ashley Pearce was the photographer and Marshall and Sharon Taylor provided music.

The new Mrs. Brownfield graduated from Southampton High School in 2003 and received a bachelor’s degree in elementary education from Chowan University in 2007. She is employed at Meherrin Elementary School.

Her husband is a 2003 graduate of Southampton High School and received his bachelor’s degree in electrical engineering in 2008. He is employed by Canon.

After a honeymoon to Tennessee, the couple resides in Ivor.

A couple’s lawn and garden shower was given by the bride’s brother and sister-in-law, Kevin and Erin Gunn.

Mary Lee Butler and Lisa Moore, co-workers of the bride, honored her with a miscellaneous shower.

Courtney Daniels of Zuni and Brian Shifflett of Newsoms were married at 4 p.m. Saturday, Aug. 9, 2010, in the... read more