Bratton, Keyt score two touchdowns each to lead Isle of Wight to 41-0 win

HAMPTON—Chargers Matt Bratton and Charles Keyt led Isle of Wight Academy with two touchdowns each for a 41-0 win over Hampton Christian on Friday night.

Head Coach Dale Chapman said he took advantage of not having a game last week to work with the team. It paid off.

“The offensive line has improved along with linebackers and backs,” said Chapman, noting the linebackers were hitting hard.

Keyt led in rushing with 177 yards on 23 carries. Bratton was top receiver with 34 yards.

The Chargers had one interception and were penalized 8 times for a total of 35 yards.

Keyt scored on a 15-yard run. Tameron’s kick was good.

In the third quarter, Keyt scored on a 9-yard run, Tameron’s kick was good.

For the final score, Epps rushed in on a 12-yard run. Tameron’s kick was good.

Isle of Wight will travel to Kenston Forest for a 7 p.m. league game on Friday, Sept. 17. 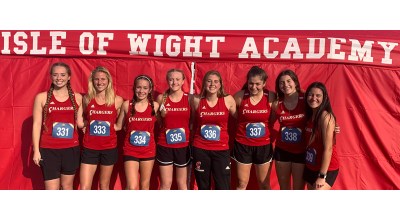