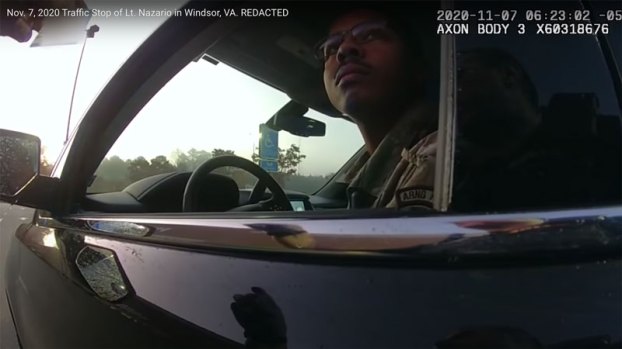 The town of Windsor has released body camera footage of a traffic stop involving Army 2nd Lt. Caron Nazario that occurred about a month prior to the one where Officers Daniel Crocker and Joe Gutierrez held him at gunpoint, and Gutierrez pepper-sprayed him.

On Nov. 7 last year, a different officer stopped Nazario in the parking lot of Windsor’s Food Lion, telling Nazario that his radar had detected the lieutenant doing 54 miles per hour in a 35 mph zone.

Aside from the alleged speeding, the circumstances surrounding both traffic stops are nearly identical.

In both situations, officers report they are following an SUV with no visible rear license plate displayed that doesn’t immediately pull over. Nazario is wearing his Army uniform both times.

On Nov. 7, Nazario is heading east on Route 460 at dawn, and eventually stops at Food Lion. On Dec. 5, he’s heading west after dark, and stops at a BP gas station on the opposite side of the highway.

Other than that, the only real difference is the ways the officers react.

On Dec. 5, Crocker and Gutierrez respond by exiting their patrol cars with guns drawn, and proceed to shout conflicting commands at Nazario — at times telling him to keep his hands out of the window and other times telling him to get out of the car, which would have required putting at least one arm back inside the vehicle to unbuckle his seatbelt.

When Nazario tells Gutierrez he’s “honestly afraid” to exit his vehicle, Gutierrez tells him he “should be,” then pepper-sprays him and forces him out of his car and onto the ground.

Gutierrez was fired April 11 — four months after the Dec. 5 incident — which had more to do with video footage of Gutierrez’s conduct going viral than the conduct itself, according to statements Police Chief Rodney “Dan” Riddle made during an April 14 press conference. At that same conference, Riddle defended his officers’ conduct, saying Nazario’s actions raised “red flags” for Crocker and Gutierrez based on their training.

But those same “red flags” — no visible plates, tinted windows, driving a ways before stopping — appear to be present in the video of the Nov. 7 incident as well, only that time the officer doesn’t pull his gun immediately upon exiting his patrol car.

Instead, a polite exchange follows, in stark contrast to the Dec. 5 interaction. The officer calmly asks Nazario for his license and registration. Nazario tells him he purchased his car in New York, and says Virginia’s Department of Motor Vehicles has been “backed up” in issuing him permanent plates.

Nazario then asks to be let off with a warning, which the officer declines, telling Nazario he’d been doing only one mile below the standard for reckless driving by speed.

Nazario has a court date of May 12 in Isle of Wight County General District Court to answer the speeding charge, according to court records.

Nazario is suing Crocker and Gutierrez personally for at least $1 million in federal court. His lawyer, Jonathan Arthur, blames COVID-19 protocols for the delay in Nazario being issued permanent plates.

He says the dealer — not Nazario — was the one to affix the temporary plate to the upper right-hand corner of Nazario’s rear window.

According to Jessica Cowardin, spokeswoman for the DMV, Virginia dealers typically issue temporary license plates for 30 days, but state law allows dealers to request an extension of up to 90 days under certain conditions.

“We cannot speak to New York’s processes and procedures for the issuance of temporary license plates,” but the turnaround time for receiving permanent Virginia plates can vary, depending on whether a driver has made an in-person appointment at one of the DMV’s customer service centers or applied for new plates by mail or at one of the DMV’s partner offices, Cowardin said.

“Customers who apply for a title and registration at a customer service center or DMV Select typically leave with their paperwork and permanent license plates the same day,” she said.

The town first uploaded the video of the Nov. 7 incident last week, but then took it down and uploaded an edited version. According to Town Manager William Saunders, the first video was taken down once he realized there were portions that included some of Nazario’s personal information, including his home address and driver’s license number.