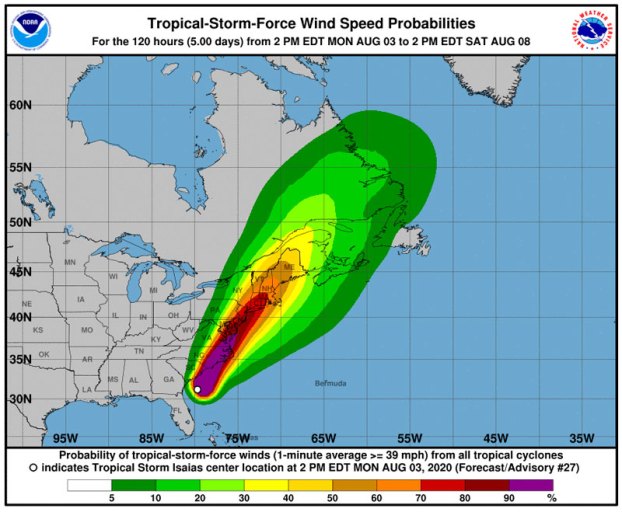 From now until further notice, a tropical storm warning is in effect in Western Tidewater where Isaias is concerned, according to the National Weather Service in Wakefield.

As of 5:34 p.m. Monday, strong winds ranging from 35 to 45 mph, with gusts up to 60 mph, could be felt from early Tuesday to that afternoon. The NWS urges people to complete work in protecting both their lives and property as soon as possible. If feasible, move to a safe shelter before the wind becomes dangerous.

A flash flood watch is also in effect from 10 p.m. today through 10 a.m. Tuesday. Storm rainfall is expected to range from 3 to 6 inches and even higher amounts locally. The agency stated that quick rises in rivers and creeks are possible, as well as flooding in low-lying areas or those with weak drainage.

People are warned to not enter or cross flowing water or water of unknown depth in any way.

“Stay away or be swept away,” as the NWS put it.

Tropical Storm Isaias — pronounced “ees-ah-EE-ahs — is forecast to make landfall along the South Carolina or North Carolina coast on Monday evening. The storm is still expected to be a strong tropical storm as it tracks north northeast across eastern Virginia and the Delmarva region on Tuesday. Isaias will then move northeast across New England on Wednesday.

NWS again emphasized that potential impacts from strong winds could include:

• Mobile homes could be damaged, some destroyed, especially if poorly anchored or exposed to wind.

• Some roads could be blocked from debris such as trees or their branches and limbs.

• Losing electrical power and communication is also a possibility.

The agency added that some tornadoes are expected and several places might experience damage such as loss of communication and power, roofs torn off house, demolition of mobile homes and large trees broken or even uprooted.

Residents are advised that if a tornado warning is announced, then quickly get to shelter and move to an interior room if possible. If you’re driving, look shelter options.

For the latest weather and storm information go to weather.gov/wakefield.

Accident on 460 results in fatality