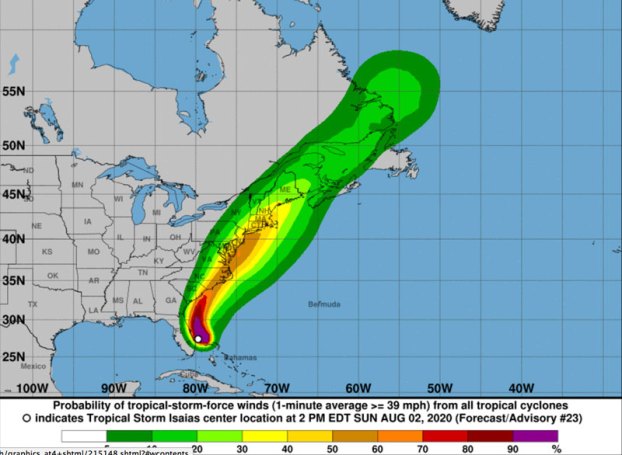 Though Isaias has been downgraded from a hurricane to a tropical storm, the National Weather Service in Wakefield is still advising people not to take it lightly.

The agency issued a tropical storm watch effective now until further notice. As of 5:56 p.m. on Sunday, the NWS stated that Isaias — pronounced “ees-ah-EE-ahs — is forecast to move northward near or along the Southeast coast through Monday then move inland over the South Carolina or North Carolina coast Monday evening. The storm is then expected to be over eastern Virginia and the Delmarva region on Tuesday. Isaias will then move northeast across New England on Wednesday.

In Franklin, the sky will be come partly cloudy at night, with a 60 percent chance of showers on Monday. Tropical storm conditions are still possible through early Tuesday night.

Tropical storm force winds are possible late Monday night into Tuesday, especially along and east of I-95. Wind gusts to 45 to 55 mph are possible. These winds combined with the expected saturated soils could down trees and power lines.

In addition, heavy rainfall amounts of 3 to 6 inches could cause areas of flash flooding even well inland into Western Tidewater. The agency added that moderate coastal flooding is also possible, with 1 to 3 feet of inundation. Lastly, there is a marginal risk of tornadoes late Monday night into Tuesday, mainly along the coastal plain and Eastern Shore.

NWS said that potential impacts from flooding rain could include:

Damage from strong winds could include:

• Mobile homes could be damaged, some destroyed, especially if poorly anchored or exposed to wind.

• Some roads could be blocked from debris such as trees or their branches and limbs.

• Losing electrical power and communication is also a possibility.

Governor declares state of emergency in advance of Hurricane Isaias

FRANKLIN Gov. Ralph Northam today declared a state of emergency in advance of Hurricane Isaias, which is expected to impact... read more