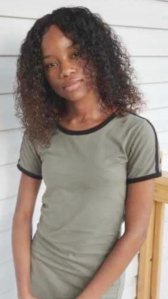 A high school senior’s year is generally one that can be fulfilled not only by academics and athletics, but also extracurricular activities, such as a job, class trip or prom. This year, the novel coronavirus (COVID-19) significantly altered how those students would learn. In the interest of health, earlier this spring Gov. Ralph Northam closed public schools for the remainder of the scholastic year. This meant that learning went online and those hoped-for good times outside of the classroom were essentially cancelled.

In keeping with that philosophy, a few weeks ago the city school board arranged for signs to be made that commend each graduating Franklin High School senior. These were displayed on the grounds for a time, then later the students were allowed to take them home. Two of those Broncos shared how the pandemic affected the remainder of their schooling.

Carneisha N. Whitehead said the change in how she had been learning, “didn’t affect me adversely. It showed how we can do work online.” She added that more studying has been accomplished as a result.

“But it’s kind of sad because it is our last year,” said Whitehead, who is a daughter of Carlos and Kesiha Whitehead; her siblings are Carlos and Caryona.

She continued, “It messed with your communication skills. I can’t interact [with my friends] because of the social distancing [requirements]. Now I just talk on the phone or text.”

Her schedule has been simplified by not having to go to FHS, but that doesn’t mean she’s goofing off.

“I wake up, get online and do the work. There are three hours of classes [via ZOOM]. I post my work online,” said Whitehead, who is also a dual biology student at Camp Community College, also done electronically.

In addition, she also works at Burger King.

Her post-graduation plans include attending George Mason University in Fairfax County, where she will major in criminal justice law with the goal of becoming an attorney.

“I like to debate with people,” she said as one explanation for her career choice.

The posting of signs at the school has been a nice gesture, said Whitehead, who added, “I want to thank Franklin Public School and Principal [Travis] Felts for being kind and still allowing us to have a graduation and allowing me to contact the school when needed.” 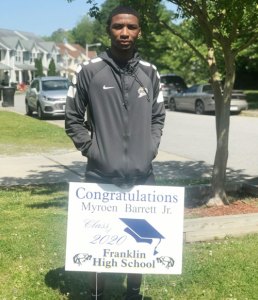 Myroen Barrett Jr. has not been a fan of the online classes.

“It’s kind of sad,” he said about the experience of studying at home and not being able to interact directly with his teachers and classmates. (Barrett otherwise stays in touch with friends through FaceTime and texting.) Further, his hopes for athletic glory were squashed. Last year the track team came in third place, and all the runners were hoping to do even better.

The disappointment includes “No prom. No senior trip to Six Flags and no real graduation.”

“I would like to have presented my speech to everyone,” he said, who was hopeful to be either as salutatorian or valedictorian.

Barrett is a son of Shanquea and Myroen Barrett Sr., and is a brother to Kayla; Mykira and Mylon.

While there has been disappointment this last year, there’s also been consolation: “I got all A’s,” said Barrett, who also took a government class at Camp College.

As if schoolwork were not enough, he’s been working for Individual Choices, an at-home company that assigns him to clean up and do yard work for clients.

Post-graduation, Barrett will study mechanical engineering at Old Dominion University. He wants to design useful things such as elevators.

His closing thought is for not only the FHS Class of 2020, but for all classes of 2020: “We’ll make it through and will all be successful together.”

Principal Felts commended Whitehead and Barrett, saying, “They’re both excellent students — top-notch. They will be missed next year. I wish them well.”