Arrests made in commercial burglary investigation 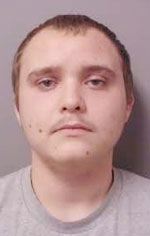 Two arrests have been made in connection to a commercial burglary that allegedly took place in the early hours of Monday. According to Maj. Camden Cobb of the Southampton County Sheriff’s Office, on Monday around 2:45 a.m., deputies responded to the 28000 block of Southampton Parkway to the Happy Vapor and Tobacco Shop for an alarm. On arrival, they observed the front door to the business had shattered glass and some of the display cases inside the business were empty. Later it was determined that nearly $3,500 worth of product was stolen from the business. Deputies began investigating the burglary and collecting evidence from the scene.

Later that same day, a tip was received around noon about possible suspects in the case and the location of some of the stolen items. Deputies secured the building while detectives obtained a search warrant for a residence in the 25000 block of Pine Street in Courtland.

That location was searched and evidence from the burglary was located. There were three individuals in the residence that were charged in connection with the incident. Nicholas Drake Martinette, 22, of Courtland was charged with: Conspiracy to Commit a Felony; Burglary; Destruction of Property >$1,000; Grand Larceny; and Contributing to the Delinquency of a Minor.

Gage Russell Allen Blalock, 20, of Franklin, was charged with: Conspiracy to Commit a Felony; Burglary, Destruction of Property >$1,000, Grand Larceny, and Contributing to the Delinquency of a Minor. Both are in Southampton County jail without bond.

One male juvenile was detained pertaining to this incident and released to the custody of a guardian. Detectives will seek juvenile petitions on that subject from the Court Services Unit later this week.