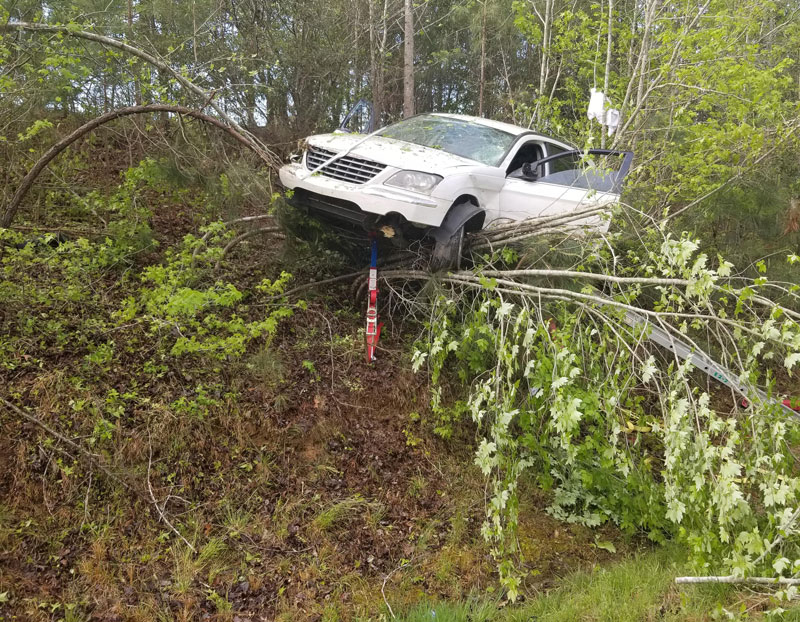 Deputies assisted Capron Rescue, as well as Courtland, Drewryville and Capron volunteer fire departments with securing and stabilizing the vehicle so EMS personnel could get to the man to provide medical treatment. - Submitted Southampton County Sheriff's Office 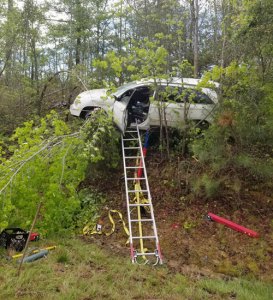 Capron Rescue, as well as the volunteer fire departments from Courtland, Drewryville and Capron assisted deputies at the scene. They secured and stabilized the vehicle so that EMS personnel could get to the man to provide medical treatment. — Submitted Southampton County Sheriff’s Office

A Roanoke man wanted by law enforcement has been taken to a hospital for serious injuries following a pursuit and car crash this morning, April 21.

Maj. Camden Cobb, a spokesman for the Southampton County Sheriff’s, announced via a press release a short while ago today about the traffic stop that resulted in a chase at approximately 8:50 a.m. He stated that a Southampton County Deputy stopped a vehicle for a traffic violation on Route 58 near Barham’s Hill Road in Drewryville. The driver and only occupant of the vehicle was identified, and the deputy on the stop was informed that he was wanted out of Roanoke for shooting into an occupied dwelling and was considered armed and dangerous. When deputies approached the vehicle to have the man step out, he put the vehicle in drive and left. The vehicle travelled approximately one mile down the road while deputies were catching up before the vehicle drove through the median, crossed over both eastbound lanes of travel and went into the woods.

Deputies assisted Capron Rescue, as well as Courtland, Drewryville, and Capron volunteer fire departments with securing and stabilizing the vehicle so EMS personnel could get to the man to provide medical treatment.

The man was flown from the scene to VCU. No other persons were involved in the accident and no one else was hurt.

“We are not releasing the name of the man involved in the accident due to the seriousness of his injuries until his family members have been contacted and notified,” Cobb stated.

Southampton County deputies are investigating the accident. The Virginia State Police is on scene assisting with the accident and with traffic control. VDOT is also on scene for traffic control and has temporarily rerouted traffic in that section of Route 58. As of 2 p.m. Tuesday, the eastbound lane was still closed completely, and both lanes of westbound were being used to keep traffic moving in both directions.

Cases up by 10 percent in district