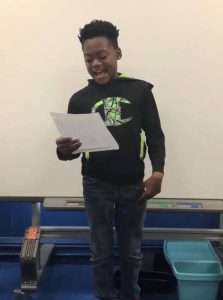 In observance of Martin Luther King Jr. Day, fifth grade students in Grayson Drake’s history class at Capron Elementary School listened to a reading of Dr. King’s “I Have a Dream” speech, and then wrote their own speeches on their visions for the future based on his original. They then presented their speeches to the class to share what world changes they planned to inspire in their lifetimes. King, an American Christian minister and activist, became the most visible spokesperson and leader in the Civil Rights Movement from 1955 until his assassination in 1968.