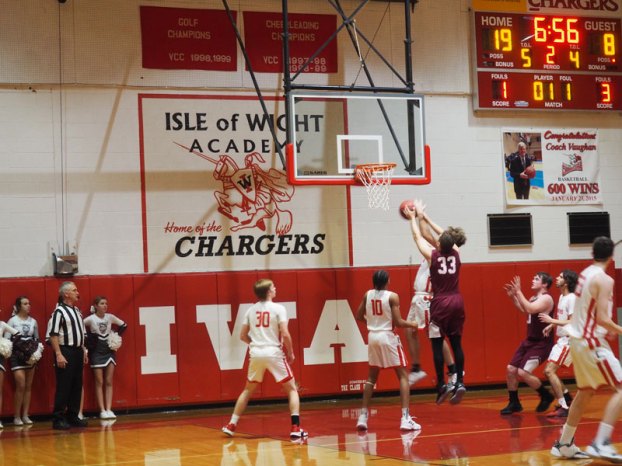 A Charger tries to keep a Viking from scoring. -- Stephen Faleski The Tidewater News 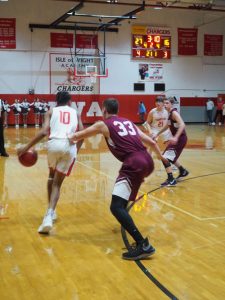 Charger No. 10, Jabarie Thomas, gets away from a Viking. — Stephen Faleski The Tidewater News

Hampton Christian was 5-for-8 from the foul line in the fourth quarter, topping Isle of Wight Academy 59-54 here Friday night.

Kendon Peebles’ 27 points led the way for the Warriors; IWA was paced by Russ Wells’ 17 points.

But the Warriors bounced back with two consecutive baskets by Jaylin Horne to make it 17-16. Isle of Wight took its largest lead on a 3-pointer by Wells that made it 28-22 with 5:04 left in the third quarter.

Hampton would later tie the game twice, at 37 and 39, but surged into the lead, outscoring IWA 12-8 over a six-minute stretch in the period.

The loss dropped IWA’s record to 7-6, 2-2 in The Metro Athletic Conference. 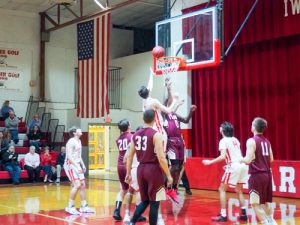 IWA outscoring the Vikings 19-8 in the contest’s opening acton 8 points by Wells. The Chargers also took a 33-16 advantage in the second period on the strength of a 8-0 run that closed out the half.

IWA also outscored Brunswick 12-2 spanning the third and fourth quarters to take a 62-40 lead on a trio of baskets each by Wells and Thomas.

StoneBridge gutted out a 44-43 win over IWA Tuesday night, [Jan. 7], at the school off Joliff Road.

The teams were tied at 41 in the final minute when a Wells basket with 30 second left put IWA up 43-41. But a late 3-pointer by the Cavaliers with :05 left put StoneBridge ahead for good.

A 3-point attempt by IWA at the buzzer went for naught.

After a 6-5 first quarter that favored the Chargers, StoneBridge ran off 6 consecutive points to take an 11-6 lead.

A foul shot by Grant Worthy, a field goal by Wells and a two buckets by Trent Holland put IWA back into the lead, 14-11, with 4:25 left in the first half. But The Cavaliers scored 8 of the next 11 points to take a 20-17 lead into intermission.

StoneBridge clung to a 7-point lead most of the second half, but scored seven consecutive points with fewer than 3:00 remaining to tie the game at 41.

IWA outscored the Lady Cavaliers 14-1 in the first quarter, but the home team quickly rebounded to trail only by 5, 16-11, at halftime.

The Lady Chargers return to action with four games this week. The team was scheduled to play Monday through Wednesday versus Richmond Christian, Denbigh Baptist and Southampton Academy. They also travel to Portsmouth Christian this Friday.

All Elite Wrestling LLC’s Billy Gunn, formerly of the World Wrestling Entertainment Inc., poses for a photo with members of... read more