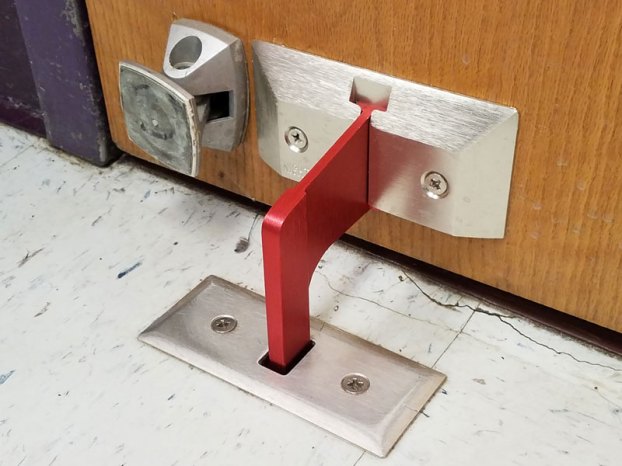 The Tidewater News took this photo of a Nightlock “Lockdown 1” decice installed on the door to Carrsville Elementary’s main office in late March. The devices have since been disabled once again following a meeting between Isle of Wight County Schools and the State Fire Marshall’s Office. -- File Photo

Such is the latest development in Isle of Wight County Schools’ efforts to equip its schools with door locks that were first purchased and installed in 2018, but removed later that year when the locks were found to be potentially in violation of state fire codes. In March 2019, IWCS had received the OK from Art Berkley, the county’s director of inspections, to reinstall the locks at Carrsville Elementary School, but the division has since learned that the State Fire Marshal’s Office is once again requiring the locks to be disabled.

Lynn Briggs, director of community and media relations for IWCS, clarified that the division had not received any additional written notices from the state on this matter, but rather had been told during a meeting with representatives of the State Fire Marshal’s Office that the state considered their original notice to IWCS to still be in effect.

The locks, known as “Lockdown 1” models, are manufactured by the Michigan-based company Nightlock, and consist of an aluminum locking handle, floor plate and door plate. According to Nightlock’s website, each device, when dropped into place, can withstand force of up to 2,000 pounds on a door that opens into a room, and up to 1,600 pounds of force on a door that opens outward. The intent, according to school division officials, had been to provide each building with an added layer of security in the event of an active shooter or other lockdown scenario.

The school division purchased enough locks in 2018 to equip every building — a total of 718 doors — for a purchase price of $64,658. This money had come from roughly $820,000 in savings from school roof repairs, which the county’s Board of Supervisors had re-appropriated to IWCS earlier that year for security upgrades. However, Nightlock’s website also includes a disclaimer informing buyers that they must obtain approval from local code officials or the fire marshal before the devices can be installed and used.

As previously reported, it was this requirement that led to IWCS needing to remove the devices for the first time last year. Division personnel had checked with the county’s chief of emergency services and fire marshal, Jeff Terwilliger, but had not also checked with Berkley, whose approval — Terwilliger advised the division — was also needed. This prompted the county to require the division to remove the locks early into the 2018-2019 school year. Around this same time, the division also received an email from the Virginia Department of Education, which said the State Fire Marshal’s Office had notified the VDOE that the installation of these devices “may adversely impact the listed fire resistance of the door and any warranties in effect” and that “some of these devices may be in conflict with provisions in the Virginia Uniform Statewide Building Code (USBC) and the Statewide Fire Prevention Code (SFPC).”

However, the email also stated that “the State Fire Marshal’s Office indicates that, where these door barricade devices have been installed in school facilities, they must be removed … In some localities, the fire official is the local fire marshal. In those localities that do not have a local fire marshal, the State Fire Marshal is the fire official.”

Since Isle of Wight County has its own fire marshal, division officials, according to Briggs, had been under the impression that the situation could be resolved locally, simply by rectifying their initial oversight in not contacting Berkley. After observing a lockdown drill in March at Carrsville Elementary using the Nightlock devices, Berkley had signed off on their use at that school.

Briggs told The Tidewater News around the time the locks were reinstalled that the division planned to repeat this process with Berkley for each of its nine schools, explaining that the purpose in inviting him to observe a lockdown drill was to he could see that school personnel know how to properly use the locks and law enforcement and emergency personnel know how to release the devices in the event of an actual incident. As of April 10, the division had completed this process with Berkley and reinstalled the locks in Carrsville Elementary, Windsor Elementary and Hardy Elementary.

Briggs confirmed that as of the division’s School Board meeting on June 13, the aluminum locking handles — but not the door plates and floor plates — had been removed, which she said was all the State Fire Marshal’s Office representatives had stated the division needed to do in order to comply with the original notice.