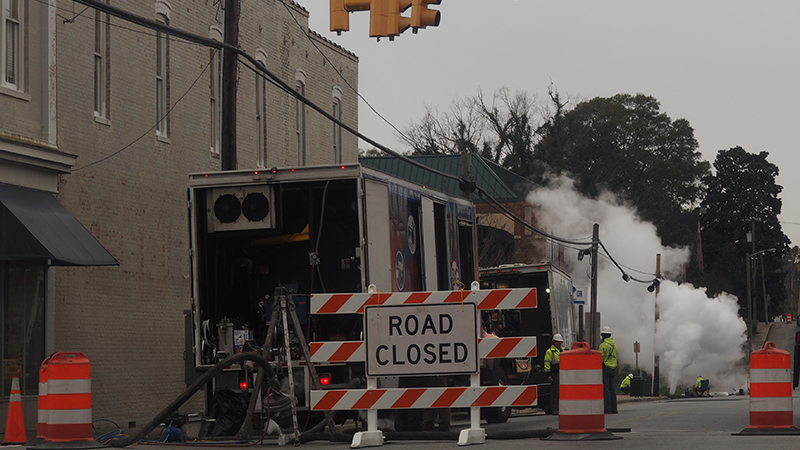 West Second Avenue in downtown Franklin is once again closed for sinkhole-related repairs. Crews hope to complete work on a sewer pipe and reopen the road by the end of the day Wednesday.

West Second Avenue in downtown Franklin is once again closed for repairs related to the sinkhole that formed on Wednesday, Oct. 30.

According to Steve Watson, utilities superintendent for the City of Franklin, crews with Prism Contractors and Engineers, a contracting firm hired by the city, are currently installing a cured-in-place liner in the closed sections of the road. He described this as a “pipe within a pipe,” explaining that this will bring the existing clay sewer pipe beneath the street back up to par, so that it is not necessary to dig up the entire block 9 to 10 feet deep.

Public Works Director Russ Pace and Deputy Director Chad Edwards had previously identified this the failure of this clay sewer pipe as the root cause of the sinkhole. The repair that had been made to Second Avenue when it was closed from Nov. 1 through 4, according to Watson, was for the purpose of dewatering the sinkhole.

“There was so much groundwater in the hole, they [crews] couldn’t get to the pipe,” Watson said.

Watson added that the repaired sewer line is currently being dried and cured, and that the road should be reopened to traffic by the end of the day today. However, there is also a storm drain pipe in need of repair at this same site that will necessitate the road closing again at a later date. This is because the replacement storm drain pipe was the wrong size, he said.

Though the repair site is still confined to the 100 block of West Second Avenue, the road has been detoured from its intersection with Main Street to its intersection with High Street. This was done because the city’s Public Works Department was concerned about tractor trailers not being able to make the turns onto the city’s narrower side streets, Watson said.