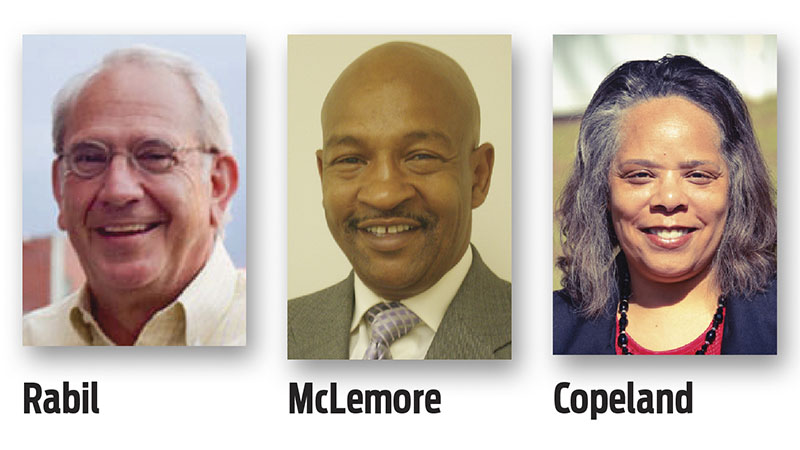 FRANKLIN
As of press time, City of Franklin’s Frank Rabil had 820 votes to the 251 write-ins in Tuesday’s election for mayor. Councilman Greg McLemore also returns to his seat for Ward 3, defeating challenger Andrea Hall-Leonard 187 to 98. There was one write-in for that seat.

Wynndolyn Hilliard-Copeland was the winner for Ward 5 with 131 votes. That seat belonged to her mother, Mary Hilliard, but she had decided not to run for reelection. Ricky Sykes, the other challenger, had 125 votes. There were three write-ins.

Robert “Bobby” Cutchins also kept his place in Ward 6 with 177 votes; there were only three write-ins.

Voter turnout was evidently light, though. By 4 p.m. at the American Legion polling site on Armory Drive, there had been only 195 people who turned up to vote.

Over in Ward 5, Cynthia Scott said she was hopeful that Sykes would win, calling him “very honest, and willing to make a stand.

“He’s a leader and has a great personality,” she added.

The poll supervisors in the Martin Luther King Center voting site said that 166 people had voted by 4 p.m.

Over in Southampton County, the Town of Boykins has a new mayor, Danny Ray Bolton. The Southampton County Registrar Lynn Burgess reported he had 57 votes; incumbent Spier Edwards had 47; and fellow challenger Jerry Rice was at 41.

Burgess stressed that all these results are unofficial until the office can canvass to ensure the numbers.

• William Nick Kitchen IV remains mayor of the Town of Capron with 13 votes. The six council members — William Paul Davis, William G. Jarratt Jr., Sharon K. Jones, Erma W. Joyner, Deborah Starke and Reginald T. Vaughan — were all returned to their seats. All but Jones got 13 votes; she got 12.

• Danny Williams remains mayor of the Town of Courtland; he had 27 votes. For Ward 1,

As of about 1:35 p.m., 77 of the town’s 347 registered voters had cast their ballots. In Courtland, the first voter didn’t come into the fire house polling site until 10:41 a.m., according to official Debbie Duckett, and that person was one of the council candidates. As of 3:10 p.m., only one other person had shown up to cast a vote.

Over at the Ruritan Club polling site, the first people didn’t show up until 8:30 a.m., according to the polling supervisors. Eight people had voted by mid-afternoon, though only a few more were expected.

• In the Town of Ivor, there were 38 write-in votes. Burgess said that that name is still to be determined. Sandy Vick had chosen not to run for re-election as mayor. Six council seats were also up for election but only four people had filed to appear on the ballot. The registrar add that the Electoral Board will determine who will fill the other two seats. Meanwhile, Judith D. Raiford had 29 votes; Marcus W. Zimmerman at 36; Bobby L. Crumpler at 29; Timothy S. Suhr at 37; and 72 write-ins.

• In the town of Newsoms, six town council seats were up for re-election and only six candidates had filed to appear on the ballot. The town’s mayor, Vanless “V.D.” Worrell, was also up for re-election and ran unopposed. He had 33 votes. Council member votes: Carol Majors, 32; Neil Drake 35; Wesley Story, 28; Judith Rose, 22; Damien Dwyer 34; and Kendall Brock, 29.