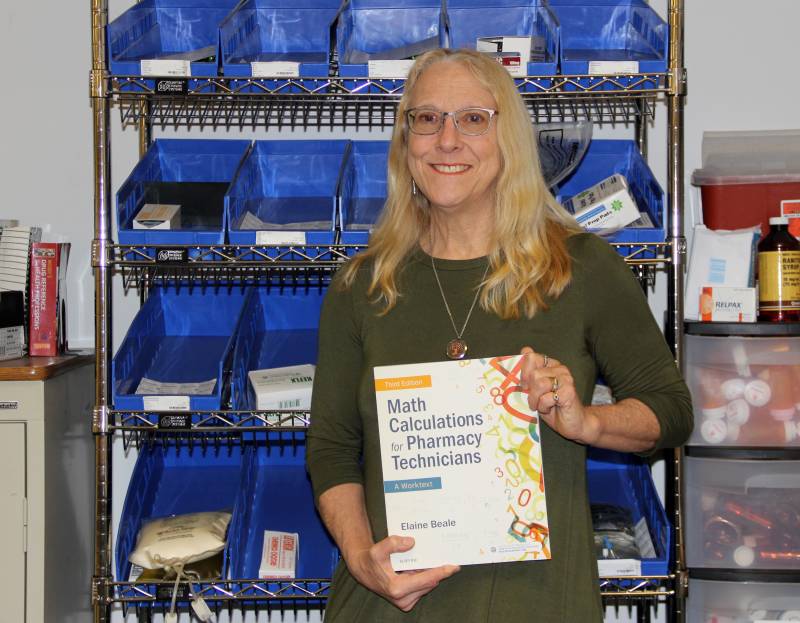 “The first year I began teaching Pharmacy Tech at PDCCC, I used an early edition of this text,” recalled Beale. “I found so many errors that I began constantly reporting them to the publisher.”

Later, Beale wrote a chapter on calculations for one of the publisher’s textbooks. Eventually, she was asked to undertake this endeavor.

“The company asked if I would like to rewrite the entire text, keeping the same title, after the original authors of Math Calculations for Pharmacy Technicians decided to stop writing the book,” she said. “I worked on it every chance I got, focusing on using clear explanations to help students build on their knowledge and be able to progress through the material successfully.”

The detailed publication took three years to complete. According to the Elsevier website, the latest edition includes a basic math skills review, conversions between measurement systems, interpretations of drug labels and physicians’ orders, and calculations of medication dosages based on patients’ age or weight.

There is expanded coverage of chemotherapy and intravenous feeding calculations, numerous practice problems, and step-by-step examples.

Beale stated that pharmacists have a lot of responsibilities that are not apparent to the public and technicians are able to assist in many of these duties.

“Pharmacists are responsible for monitoring patients for compliance with their medications, detecting possible food and drug interactions with medications, and checking any work performed by technicians, all while keeping the flow of prescriptions at a high rate,” she said.

“Pharmacy involves a great deal of math, which becomes more complicated when dealing with compounding (mixing) both sterile and non-sterile medications.” Pharmacy technicians must know how to perform these pharmaceutical calculations as well as business math calculations used in retail pharmacy.

While Beale favored the undertaking of writing the book, she was also glad to see her work come to fruition.

“I took on this project because I have a love of math, which I know is not shared by a lot of people,” she said. “But, I feel I can explain it to others in a way that they can understand and hopefully, begin to enjoy.”

The new textbook is available from several sources, including Elsevier, Amazon and Barnes & Noble for $75.95.

Beale earned a Bachelor of Science degree in Pharmacy at The University of Toledo in 1984. Over the years, she has worked in retail, hospital and consulting pharmacy. She has taught physical science, biology, physics and weight training at Southampton Academy and exercise classes and weight training at the YMCA for 21 years. Her first class of students at PDCCC after developing the pharmacy technician program was in August 2012.

Wendy Harrison is the public relations specialist at Paul D. Camp Community College. She can be reached at wharrison@pdc.edu.