Five to seven inches of snow expected in Franklin, Southampton this weekend 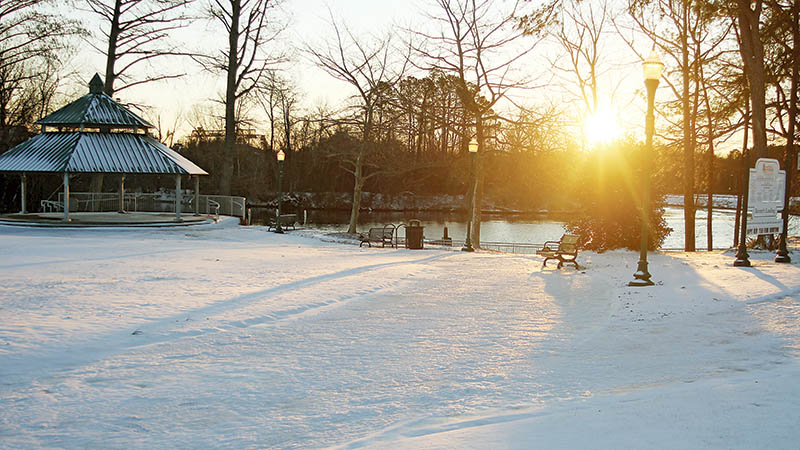 FRANKLIN
Franklin and Southampton County will likely receive between five to seven inches of snow this weekend and could receive as much as eight to 10 inches according to meteorologists at the National Weather Service’s Wakefield station tracking the progress of Winter Storm Helena.

According to Jeff Orrock, a meteorologist with the Wakefield station, snowfall in the western Tidewater area will likely begin shortly after midnight on Saturday and will pick up around 4 a.m. Daybreak to 2 p.m. is when snowfall is expected to be the heaviest and Orrock predicts the snow will accumulate quickly on the ground during this time.

“It’s going to be a challenge to get the roads clear,” he said, adding that the NWS expects the snow to freeze to the pavement and turn to ice through Monday as temperatures drop to below freezing.

Current temperature estimates predict lows in the teens Saturday with highs in the upper 20s on Sunday.

“Monday we might be able to get up to 30 [degrees], but probably won’t get above freezing,” Orrock said.

The NWS is also watching to see if Helena moves closer to the coast, which could increase area snowfall to around eight inches, and for what Orrock described as a “sweet spot” – a 15 to 20-mile area that will accumulate higher-than-predicted amounts of snow. Orrock said the “sweet spot” could be in North Carolina, Virginia Beach, Franklin or somewhere else in the Western Tidewater area.

The NWS is not expecting many power outages at this time, though Orrock said that travel through the area could become crippled until Tuesday.

As of Thursday afternoon, no area schools had announced any schedule changes or closings.