WINDSOR — Terry Truitt, 65, answered the Lord’s call to become one of his precious angels. Surrounded by her family, Terry peacefully went to be with the Lord on Nov. 30, 2016, at Sentara Obici Hospital, after a strong battle with pneumonia and other complications, arising from underlying COPD and recently diagnosed inoperable Stage IV Cancer. 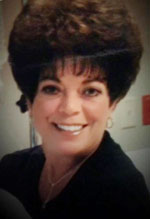 Born in 1951 in Fort Lee, Virginia, Terry spent her early childhood in Richmond, then moved to Hampton, making fond memories along the way with her brother, Michael, and her cousin, Deborah. Terry graduated from Hampton High School in 1970.

Terry worked as the bookkeeper at a family-owned business, R&J Supply, and eventually became the Administrative Assistant at Emily Green Shores, and quickly grew passionate about caring for and brightening the days of the elderly with her genuine acts of kindness and love.

Terry adored her family and friends, laughing with her daughters, having her grandchildren sleep over, and big hugs. She enjoyed saltwater fishing with her family, traveling, playing online poker, snuggling with her dachshunds, and watching movies starring Johnny Depp. She was a “second mother” to many. Terry had a brilliant smile that would light up the room wherever she went. Her smile was especially contagious around the holidays because she treasured making memories with her family of decorating, baking delicious goodies, and putting her decorative touch on the gifts she wrapped. Her family was especially drawn to her because of the joy and love they could feel by simply being around her.

May the effervescent and fun-loving spirit of Terry continue to live in our hearts until the joyous day comes when we can once again see her sweet face.

Visitation will be held on Monday Dec. 5, from 7 to 8 p.m. in Parr Funeral Home, 3515 Robs Dr, Suffolk, where the funeral will be on Tuesday, Dec. 6, at 1:30 p.m., officiated by Pastor T.A. Powell, followed by interment at Albert G. Horton Jr. Memorial Veterans Cemetery at 3 p.m.

Condolences may be posted on www.parrfuneralhome.com.