Service to others is a part of woman’s DNA 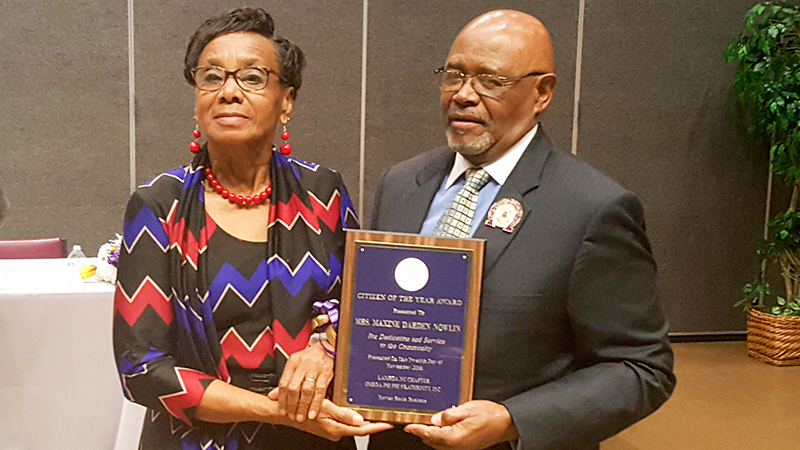 Maxine D. Nowlin of Courtland receives a plaque of recognition as “Citizen of the Year” from Clyde Johnson, program chairman for the Lambda Nu Chapter of the Omega Psi Phi Fraternity Inc. -- Submitted | Clyde Johnson

COURTLAND
Maxine Darden Nowlin has become over the years one of those “go-to” people when others have a need or require help. For generously giving of herself, she has been named “Citizen of the Year” by the Lambda Nu Chapter of the Omega Psi Phi Fraternity Inc.

Clyde Johnson, program chairman, stated in a press release, “This is an award given annually by the chapter to a deserving person who has ventured beyond regular job responsibilities to make a difference within their respective community.

“Nowlin is a person who liberally gives her talents, time, energy and professionalism to enhance the lives of people in her local community and surrounding areas through the Courtland Community Center.”

He goes on to note that the center is a Human Service Organization that provides various activities such as: an after- school tutorial program; recreational and educational programs; voter registration; voting in local elections; capabilities for connecting to the internet; adult education classes; assistance to individuals in preparing for and completing the GED; and many other activities that enhance the well-being of the citizens in the area.

“The chapter commends Nowlin for her tireless effort to make a positive different in the lives of the citizens in the community,” Johnson wrote.

The recipient, speaking in a phone interview, talked about the chapter’s recognition.

“They called me and told me that wanted to honor me. I thought it was very gratifying,” Nowlin said. She described it as a “Somebody has seen your work and we support what you’re doing kind of thing.”

But such accolades are not her motivation.

“Not that I have to win an award. The intrinsic award is what drives me,” she said. “It’s a calling. It’s something I’ve always known since even very young that that’s something I wanted to do.”

That “something” being service to others, and it’s a quality that’s practically genetic.

“My family were all community people — it’s in our DNA. My grandfather was always an advocate for people. They always came to him for whatever,” Nowlin said. “My mother was busy in PTA and organizing trips. She was an organist for churches. She even had a club — the Esquire Club – for young people.”

Most recently, the the Courtland woman — “born and raised” — has helped organize what’s being called “The Butterfly Room” at the town’s Community Center on Florence Street. Women are invited to freely “flutter” on Tuesdays and Thursdays from 9 to 10:30 a.m. There are low-impact Zumba and walking, as well as opportunities for sharing recipes, health tips, struggles and triumphs. You can call her  at 653-7831 for more information.

“It’s to support women who need someone to encourage to exercise and live healthy,” she said. “Part of their mission is to provide health activities.

While she might seem like a one-woman show to outsiders, Nowlin quickly dismisses that idea, pointing to the other people on the community center’s board: Horace Darden, James Whitfield, Larry Jones, Catherine Britt, Tenecia Shearin, husband Clarence Nowlin, Sandy Faltz and Rosilyn Bryant.

Even though I’m on the front, I really can’t do it all,” Nowlin insisted. “If didn’t have those eight people than it wouldn’t be a community center.

In addition to her husband, she highlighted Darden and Whitfield for their support.

“They were putting their own money to keep it [the center] going during a lull,” said Nowlin.

“They’re a sounding board. They let me fly with ideas. They’ll help me shape and mold them. They’re very supportive,” she said. It’s collaborative. I really appreciate the effort they had gone through to honor me.”