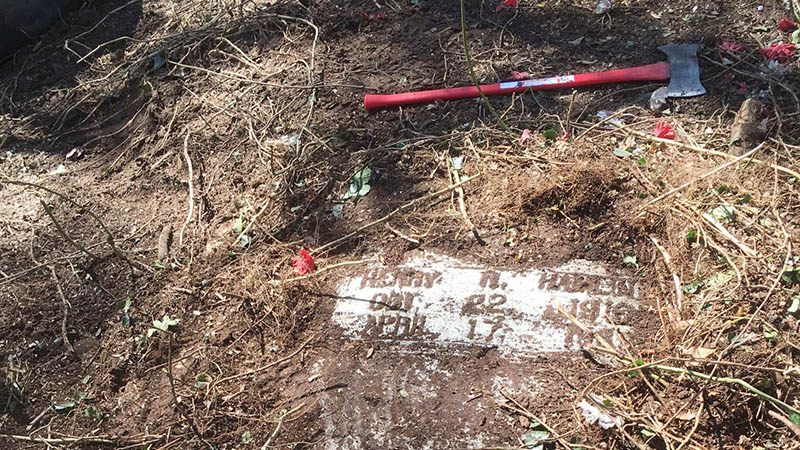 The name is visible in this instance, but not every grave had names on their markers or even tombstones. Some, said James Denoncourt, were just lumps of dirt. -- James Denoncourt | The Tidewater News

ISLE OF WIGHT
As with gardens, cemeteries can be overtaken by nature when people are not able to keep them as clean and well-lighted places. Grass and then weeds first rise triumphant. Ivy might creep in and anchor itself to tombstones. Leaves will seasonally blanket the ground. Whole trees might fall over blocking access to graves. Even the earth will gradually shift and pull down the monuments to the deceased.

Much of this happened to the cemetery near Ebenezer African Methodist Episcopal Church off Poor House Road, and it made for a sad sight.

The inspiration to make it visible and restore some dignity has come through James Denoncourt, a candidate for Eagle Scout.

“The cemetery is down from my house. My dad and I would ride our bikes by and see that it was always dirty and overgrown. I had the idea for a long time to clean it up,” said Denoncourt, 16, who belongs to Troop 3, which is sponsored by Benn’s United Methodist Church.

He is also a junior at Windsor High where his mother, Elizabeth, is the school nurse.

After securing permission from the Rev. Harper of the church, planning the cleanup began in summer 2015 and work was finished this past spring. There were one or two groups of people who helped with the cutting, hacking, lifting, sawing, etc.

The majority of the labor was done by his father, Jim, and himself (“I did all the dirty work.”). They also got much help from his twin brother, Luke. He did his own Eagle project last year by restoring a Ruritan building in Chuckatuck.

In the process, they found several graves; one slab was sunk into the ground and a metal pole had to be used to lift it out. A tractor’s strength was required as well for other tasks such as moving fallen trees; in fact, there’s another still to be pulled away.

Some “touch-ups” were needed after Hurricane Matthew, but now the cemetery has been brought to light … once again.

This Sunday afternoon, the Isle of Wight County Grave Task Force will visit the cemetery to re-inventory the markers and names where still visible.

The scout said that some graves either had no markers or they were missing names; others were just lumps of dirt.

“We did the best we could,” he said about the clearing.

Along the way, Denoncourt obviously recorded the project. The details of which will go to a different committee that will review the work before he can be presented with his Eagle award, the highest honor for a Boy Scout. The ceremony could take place this spring.

For now, he already has the personal reward of a job well done.