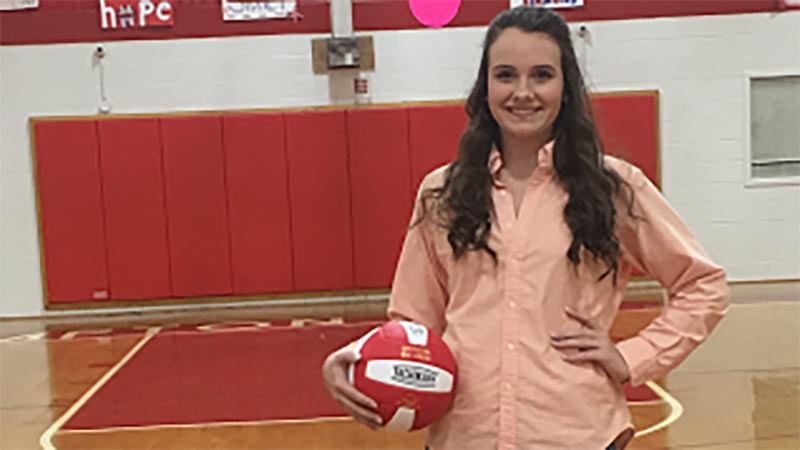 Emma Drake was one of eight players selected to the 1st team for the division 3A East Region. Further, Drake was the only member of Southampton’s team to receive All Region recognition. -- Submitted | Amy Davis

COURTLAND
Emma Drake has received 1st Team All Region for division 3A East Region. She was one of eight players selected to the 1st team for the region. She was the only member of Southampton’s team to receive All Region recognition. It is a very big honor to be selected amongst the athletes who were nominated.

Drake led the team this year in kills, aces, blocks and serve receive. She finished the year with an impressive 340 kills this year and 626 career kills, 57 aces, 38 blocks and came in second for the team with 54 digs. Drake had a fantastic final week of play earning the honor of being selected by MaxPreps — an online website that covers high school sports — as the volleyball player of the week for the state of Virginia. There were two games where she had reached and exceeded 30 kills” the match against Tabb she finished with 30 kills; and Park View she put up a record 36 kills.

Drake is the most dominating player in our district; she is fun to watch. Emma can really hit the ball down.

As good of a year with her dominating stats and recognition from the district, conference and region what makes Emma so special is her leadership, love for the game and sportsmanship. Emma is always the first one to the middle of the court after a point regardless of if we won or lost the point. She always picks up her teammates and celebrates their accomplishments. If Emma makes an error she is the first one to take ownership and always responds with “My bad, we got the next one.”

The few moments Emma was not on the court she was always the loudest cheerleader on the bench.

Drake is getting some attention from colleges and will continue to play for the 17’s Junior Nationals team out of Virginia Beach, Beach Elite.

I am excited to have Emma back next year for her senior year not only for her dominating play but also her leadership as a teammate.

Cyrus Lawrence: ‘He was the greatest of all time’