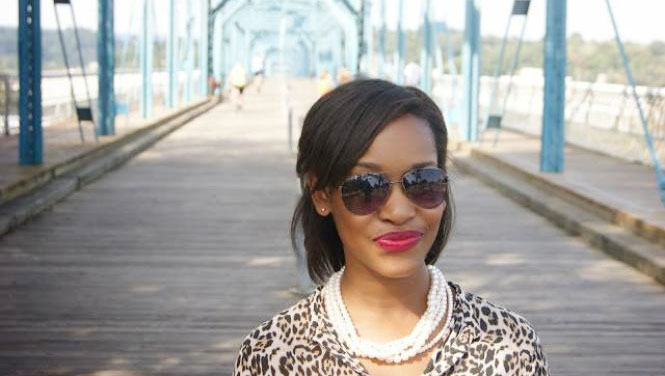 Shawanda Mason, originally from Franklin, on the Walnut Street Bridge in Chattanooga, Tennessee.

EDITOR’S NOTE: This article is reprinted with permission from Nooga.com. Shawanda Mason, a 2000 graduate of Franklin High School, is the daughter of Georgia and William Mason Jr. of Sunbeam, and sister to Antwoin of Chesapeake and Tonya of Capron.

NOOGA.COM / Special to The Tidewater News

CHATTANOOGA, TENN.—Shawanda Mason moved to Chattanooga about two years ago from Atlanta, and one of her favorite things to do is drive across Veterans Bridge.

“Even before I moved here, I loved there was water nearby that I could see,” she said. “That was definitely a selling point. I knew it was called the Scenic City, but I didn’t know why until I moved here.”

A combination of factors — including outdoor recreational opportunities, a relatively low cost of living and an entrepreneurial renaissance — is drawing new residents from across the country to the Scenic City.

After going to college at George Mason University near Washington, D.C., Mason, 31, moved to Atlanta, where her best friend had gone to college.

She got some experience with Chattanooga visiting her boyfriend, who lived here while she was in Atlanta.

“I just visited for months and months and went back to my traffic life in Atlanta,” she said.

She had been thinking about leaving her job in Atlanta, and so she started applying for jobs in Atlanta, San Francisco and Chattanooga.

She was offered a job in Chattanooga.

In her time here, she’s contributed to the entrepreneurial spirit, which was another attractive quality about the Scenic City for her.

She co-founded a nonprofit called The Chattery.

Through The Chattery, leaders offer affordable classes on a range of topics, such as mixology and financial planning, in hopes of providing area residents with a chance to stimulate the left and right brains.

She also has a blog called Eat.Drink.Frolic. and is a Nooga.com contributor.

There are some things about a bigger city that she misses, like delivery Chinese at 4 a.m.

But she’s happy not to be wasting hours of her life in traffic, she said.

She said she’s blown away by the entrepreneurial efforts in Chattanooga.

“I love that Chattanooga has so many young entrepreneurs that are doing crazy, amazing things,” she said.