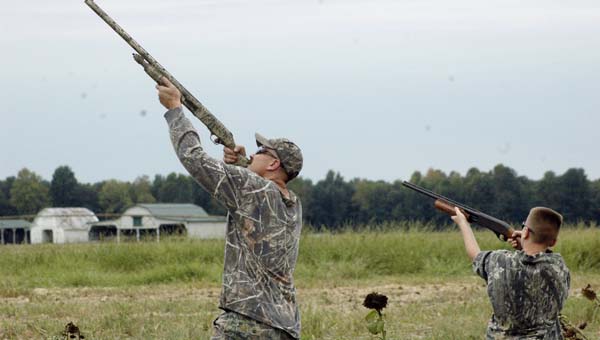 CAPRON—Talk to Brock Beasley, and he’ll tell you his daughter’s favorite thing about the free 4-H youth dove hunt is the junk food. Cheese curls and chips.

Nine-year-old Katrina Beasley begs to differ with her dad.

“I like the feeling when you get something,” she said.

The Beasleys, who live in Virginia Beach, were among about 50 who participated in the annual September hunt at Southampton Correctional Farm. The hunt was open to youth 5 to 15 years old; each had to be accompanied by a parent or guardian with a hunting license.

Donald Miller of Chesterfield volunteers to lead the hunt.

“My son grew up hunting here (participating in these dove hunts), and it’s my time to give back,” Miller said.

Katrina Beasley points to something while hunting with her dad, Brock Beasley.

Before heading to the field, he reviewed hunting safety practices with participants. Then every youngster and his or her guardian were placed in different places around corn and grain fields where doves are likely to live.

Doves are more likely to fly in the afternoons, which is when hunting begins and continues until dusk as long as there’s birds around.

It was a good day for Matt Moraczewski of Norfolk and his 11-year-old son, Drake, who stood side-by-side shooting birds that flew by.

“We’ve done this for three years,” Matt Moraczewski said. “It’s always great because there’s always a decent amount of birds every time we’re out here. I think it’s an awesome opportunity to do something with your child.”

Early into the hunt, Katrina Beasley had not bagged a dove, although she did kill one last year. She uses a .410-guage shotgun and is coached my her dad.

“He tells me to put by head on the gun, look at the bead and aim for the bird,” she said.

Her dad thinks of the event as the perfect hunt for a kid.

“They get a lot of birds here, and it’s great for shooting,” said Brock Beasley. “There’s constant action and the place is great.”