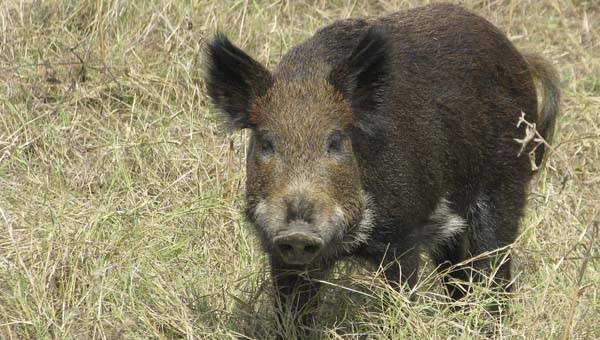 Feral hogs, such as this one photographed in South Carolina, are regarded as nothing more than destructive nuisances that can cause extensive and expensive damage to crops and wildlife. SUBMITTED

COURTLAND—To date feral hogs have not troubled Western Tidewater, and that’s how the agriculture community wants it to stay.

To call these wild pigs a nuisance is an understatement, according to regional experts.

“If you’ve ever seen what deer or bear can do to crops, you ain’t seen nothing yet,” said Aaron Proctor, district wildlife biologist for the Virginia Department of Game and Inland Fisheries in Charles City.

“They have no natural predators in our habitat, reproduce very rapidly and prodigiously,” said Southampton County Extension Agent Chris Drake. “They would pose a bigger threat to agriculture than deer, bear or turkey because they feed voraciously on crops and root up the land terribly. They will out-compete any other animal in our area for food and resources.”

While this region has been spared so far, the wild pigs are found in Virginia, including Chesapeake and Virginia Beach. Also, the varmints have been spotted and killed as close as Hertford County, N.C., which borders Southampton County in the Statesville area.

Drake said the public needs to know these animals exist, and if their population is not contained they could prove quite expensive to farmers or other rural landowners.

Dr. Allen Harper, director of the Tidewater Agricultural Research and Extension Center in Suffolk, agrees. Swine studies are his specialty.

Another one of Harper’s concerns related to feral hogs is sickness.

Although pseudorabies, for example, has been eradicated from Virginia commercial swine producers, the feral pigs are a source for this and other diseases, said Harper.

“It’s conceivable that other wildlife such as birds and rodents could in some manner transfer diseases such as pseudorabies and swine brucellosis from one to another,” he said.

As with the fast-growing vine kuzdu and the rodent nutria, wild pigs were introduced to America. In the latter case, the animals were brought to the country for hunting, and they would be in Western Tidewater today only if people move them illegally or ill-advisedly, said Proctor.

“The only thing they’re good for is pork on a dinner plate,” he added.

Hunting them may look fun, said Proctor, “but the real game is to get ahead of the curve. We don’t want them here. It just takes one truckload of pigs.”

He said a large portion of sportsmen and citizens either don’t know or realize the potential for disaster of moving feral pigs.

Further, Proctor urges people to contact authorities such as Drake, Harper or himself if they’ve spotted feral pigs or know of them being moved.