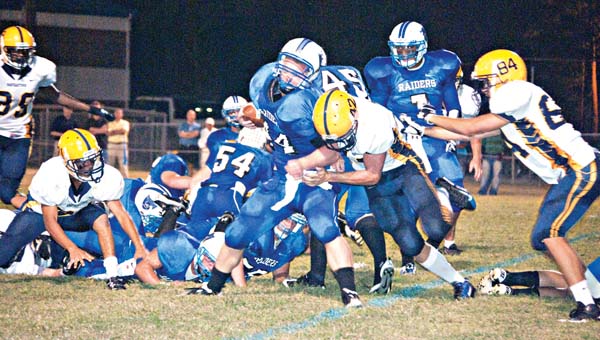 COURTLAND—Southampton Academy made it look easy in the second quarter of Friday’s game against Hampton Roads Academy. It was the other three quarters that proved difficult for the Raiders.

SA exploded for 30 points in the second quarter to take a 17-point lead at intermission, only to watch the visitors storm back in the second half for a 41-30 victory.

“Anytime you move the ball in the first half like we did and lose, it’s a tough loss,” said Raider head coach Dale Marks, whose team fell to 2-2. “Coming out in the second half, we had some guys dinged up, some guys playing out of position. As a result, we call some plays and guys don’t do what they’re supposed to do, so the play breaks down.”

The teams combined for more than 700 yards of offense. David Bogese led the Southampton ground attack with 114 yards on 21 carries. Rashodd Maxey added 103 yards on 10 totes.

Ty Smith rolled up 219 yards for the winners.

“Not to take anything away from them,” Marks said. “They played a very good second half, and No. 7 (Smith) broke some good runs. We have a tough time with a quick back. That is our nemesis.”

Maxey got SA rolling with a 6-yard touchdown run with 9:48 left in the second quarter. Bogese ran for the two-point conversion.

Devon Reyes recovered a fumble on the ensuing kickoff, putting SA back in business at the visitors’ 36-yard line. Bogese broke a 21-yard run, then scored from 2 yards out, followed by a two-point conversion pass from Wesley Barnes to Maxey, making it 16-0 at the 7:20 mark.

Smith returned the ensuing kickoff 87 yards for a touchdown to put HRA on the board 14 seconds later.

The Raiders responded quickly. After a 39-yard run by Maxey, Bogese scored again from 2 yards out with 2:55 left before halftime. Barnes and Maxey connected again for the two-point conversion to give the home team a 24-7 lead.

Bogese’s 6-yard run — set up by a 21-yard toss from Barnes to Maxey through two defenders — capped the Raiders’ first-half scoring as SA led 30-7.

The visitors, 2-2, seized the momentum with a final drive before the half, capped by Smith’s 1-yard touchdown run with 3.8 seconds remaining.

The second half belonged entirely to Hampton Roads Academy, which got scoring runs of 75, 20 and 36 yards from Smith and a 14-yard jaunt by Sean Davis.