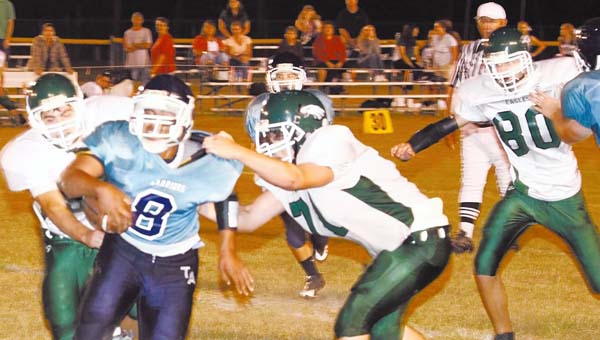 WAKEFIELD—Fredericksburg Christian’s Bret Barham and Hunter Griffis scored two touchdowns each to lead the Eagles to a 36-0 win over Tidewater Academy on Friday.

The loss leaves the Warriors with an 0-3 overall record.

“Tough loss” was all Tidewater Coach David Rodgers had to say at the end the game. 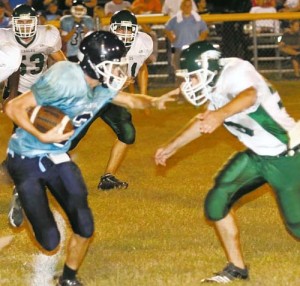 James Price on a run. -- Frank A. Davis | Tidewater News

There were a few bright spots in the game, including a 37-yard reception from Tidewater senior quarterback Ferley Yerby to Lamont Moore in the first quarter and a fumble recovery by Warrior Zach Borden in the second quarter.

The Eagles opened scoring with 8:22 left in the first quarter with a run by Barham. Ben Cross kicked the field goal.

Less than three minutes later, Barham ran the ball in and Cross kicked the extra point, making the score 14-0.

With 2:53 left in the first quarter, Griffis ran in for another touchdown. The kick failed.

Yerby was sacked with 1:40 left in the quarter, which led to a 2-point touchback for Fredericksburg Christian 13 seconds later.

In second quarter action, Griffis scored on a run with 2:58 left on the clock, giving the Eagles a 29-0 halftime lead.

For the final scoring drive, Fredericksburg Christian started on their own 35-yard line. Three plays later, Eagle Jonathon Whelan scored on a 7-yard run with 7:33 left in the third quarter.