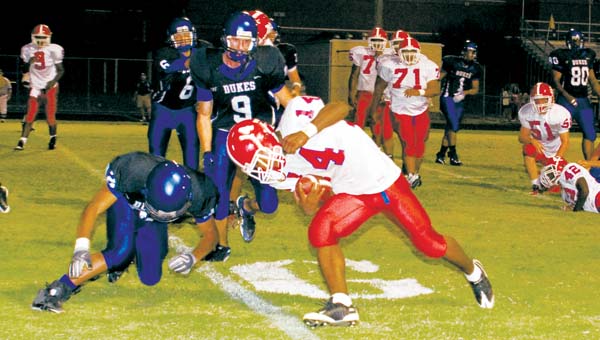 WINDSOR—Despite a rocky fourth quarter, Southampton High School was able to hold on for a 28-14 win over Windsor High School in a non-district football contest Friday night. The victory was Wes Griffith’s first-ever as a head football coach.

“I would feel better if we played four quarters of football rather than three,” Griffith said after the contest.

The Indians (1-2) jumped out to a 28-0 lead over the first three quarters. Southampton controlled the ball on offense and, despite several penalties, was able to score on its first two drives. After he ran the ball 15 yards down to the Windsor 2, Jamar Bell plunged over the middle for a touchdown with 7 minutes to play in the first quarter. Shaquille Johnson’s extra point boot made it 7-0.

Windsor was able to move the ball to the Southampton 18, but turned the ball over on a 4th and 3 play when quarterback Austin Winkles gained just two yards. The Indians took over and marched the ball 84 yards. Southampton hit paydirt when Jaron White crossed the goal line on a 4-yard run with 8:52 left to play in the half. Johnson’s kick made it 14-0.

The Indians weren’t done in the first half. Jerry Wright burst for a 32-yard gain, then took a handoff at the Windsor 5, bounced off a tackle, and scored with 5:11 to go in the half. Another Johnson kick gave the Indians what appeared to be a comfortable 21-0 lead.

Southampton took the opening kickoff of the second half and scored again. On a 4th and 16 play, quarterback Billy Nixon dumped a pass over the middle to Johnson, who ran the ball 21 yards for a touchdown at the 8:01 mark of the third quarter. Johnson also kicked the extra point for a 28-0 lead.

All hope looked lost for Windsor as the Indians sent in the second string defense. Finally, a trick play gave Windsor some hope. After a Southampton punt, the Dukes had the ball on their own 21. Winkles completed a pass to Mark Fenner, who lateraled to R.J. Edwards who blew through the line from behind. Edwards streaked all the way for a touchdown. The extra point run failed, but Windsor was on the board at 28-6 with 9:09 to play.

The Dukes took advantage of a Southampton turnover to pick up another score. Indians’ backup quarterback Mason Wright was picked off by Jahfar Eure at the Windsor 17. Five plays later, Winkles hit Edwards in the end zone with a 38-yard bomb with 3:31 to play. A 2-point conversion pass from Winkles to Edwards cut the Southampton lead to 28-14.

The Dukes put a charge into the crowd when they recovered an onside kick, which was fumbled by Nixon. The play had appeared to have been whistled dead. But after the officials conferred, Windsor had the ball on the Southampton 32 with 3:28 to play.

The Dukes, however, could not get the ball past the 9 and turned the ball over on downs.

With the 28-0 lead, Griffith said the Indians got away from what they did in the first half.

“I put some other guys in the game and we weren’t a well-oiled machine at that point. I was trying to get some other people some work,” he said. “It came back to bite us and then we had to go back out with our ones in the fourth quarter.”

For the Indians, White rushed for 63 yards on 11 carries, Saiquan Mason rushed for 61 yards on 10 carries, and Wright ran for 52 yards on 8 carries. Griffith gave credit to Mandel Featherston, a sophomore backup center, who “didn’t have a bad snap all game.”

Southampton plays at Prince Edward next Friday, while the Dukes host Northampton.