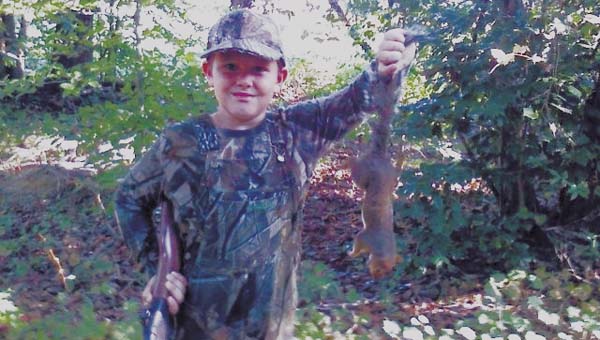 I sure hope you had a great week and the chance to explore the outdoors.

As promised, I have included a picture of Chase Eure, sent in by his father, Steve, with a squirrel the 9-year-old killed. Way to go, Chase!

Chase loves to hunt. He already has one deer to his credit, harvested last season. I’ll be looking for your entry in next year’s Big Game Contest, which I will speak more about later.

On Saturday, I attended the 4-H sponsored Youth Dove Hunt at Deerfield Correctional Center near Capron. Although the initial forecast, obtained by advance scouting of the fields, did not indicate a very positive expectation, once the shooting started, it did not let up for a minute.

What a great time was had by the 25 young hunters and their parents. According to Donald Miller, one of the many volunteers, there has never been an accident or injury requiring even a Band-Aid on any of their hunts. Miller said each hunt is started with a 20-minute lecture on safety.

Donald is also an avid re-loader, who was sure to pick up all of his spent shell casings for re-use. Let me say what we all know; our environment is going to stay clean longer if all of us recycle like Donald.

Overall, the numbers spoke for themselves; there were 204 whitetail deer entered in 13 classes, including the youth class. Out of the 204, 105 were from Southampton, Isle of Wight and Surry counties, and Suffolk.

This is a strong indication as to the economic impact the hunters, alone, have on our community and the first-class hunting we have to offer.

Pickin said the size of the deer harvested seems to be increasing every year.

“As far as I am concerned, Virginia can compete with the other states known for their whitetail hunting opportunities such as Illinois, Wisconsin and Ohio,” he said.

In addition to the deer, black bear and turkey were also judged and scored.

Also attending was Laura Newell-Furniss, director for Hunters for the Hungry. This is a non-profit organization that is always looking for new financial support as well as venison donations.

In my quest to educate myself on all that is going on in the outdoors, I have come across a source that I need to share. Take a look at www.HuntFishVA.com and download the Outdoor Report. You can subscribe free online.

Until next week, keep your muzzles out of the dirt and the sunny side up; please put safety first and take care of our environment. As far as I know, we only have one planet, and it has to last us and our children forever.

BOB RUDZIK is a soon-to-be Newsoms resident. His e-mail address is greyhound77@cox.net