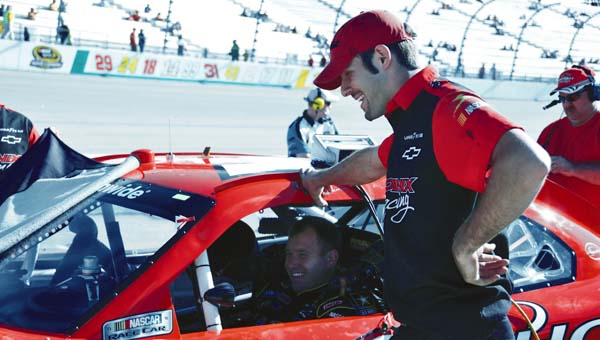 Lee Dodson of Courtland shares a laugh with driver Ryan Newman prior to Newman qualifying in the Virginia 529 College Savings 250 at Richmond International Raceway on Friday. Dodson is a crew member for Phoenix Racing. At the rear of the car is Jack Dodson, Lee’s father and most loyal fan. Newman qualified the car in the 12th starting spot for the race. -- Jim Hart | Tidewater News

As the clock strikes midnight Saturday in Richmond, the 12 drivers who will compete for the 2010 Sprint Cup championship will officially be set. But in reality, changes to the current top 12 at this point are slim and none.

During the first year of the chase in 2004, Jeremy Mayfield was 55 points out of 10th position going into the race at Richmond. Mayfield overcame that deficit by winning the race and earned a spot among the chase drivers. No one has ever made up more than those 55 points in one race. Newman needs to earn 118 points more than Bowyer to make the chase.

Now, with all that being said, the lack of intrigue with who makes the chase combined with 10 bonus points up for grabs for the race winner should equate to a great race.

After this race, the points will be reset among the top 12 with each driver getting 5000 points and ten bonus points for each race won. Denny Hamlin and Jimmie Johnson are currently tied for the most wins with five each. If someone other than those two drivers wins Saturday night, then they would begin the 10-race sprint tied atop the points.

Five drivers who will be in the chase are winless so far this season — Jeff Gordon, Carl Edwards, Jeff Burton, Matt Kenseth and Clint Bowyer. Without a win Saturday night, those guys would each have 5000 points and in positions eight through 12.

With those bonus points up for grabs for those in the chase and the reckless attitude taken by those out of the chase just adds to the excitement at a track known for great racing.

It will be good to see Terry Labonte on the track again this week as he attempts to get a car into the race that he co-owns with Bill Stavola. If the Stavola name sounds familiar, it should. Stavola fielded cars in the mid 1980s through the mid 1990s.

Is this the week Dale Earnhardt Jr. breaks out of his slump and wins a race? Junior has won three times at Richmond, tied among active drivers for most wins with Jimmie Johnson and Tony Stewart. I think the tie will be broken Saturday night, but it will be Tony Stewart with the win.

JEFF FINDLEY, a former publisher of the Roanoke-Chowan News-Herald in Ahoskie, N.C., is publisher of The Post-Searchlight in Bainbridge, Ga. His e-mail address is jeff.findley@thepostsearchlight.com.