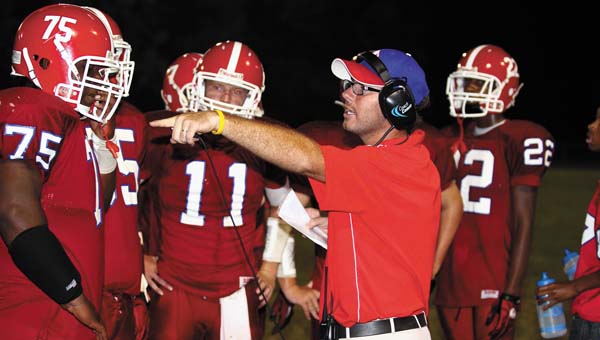 Even after being penalized for 105 yards, the Panthers still had 289 yards on offense, including 263 yards rushing. Five-foot-9 senior running back D’Anthony Lee rushed for 123 of those yards.

“I thought we battled hard,” said Southampton Coach Wes Griffith. “There were plays tonight that we put in formations that we haven’t really practiced just because we saw an opening.”

“We were able to adjust and run the play and get yards,” Griffith continued. “I think we’re doing well adjusting to a new offensive philosophy. We have to do a better job of tackling. We just have to get better, offensively and defensively. We better work on our tackling before playing Franklin.”

Bruton’s Brad Burks, a 5-foot-10 junior, scored first on a one-yard run with 11:17 left in the first quarter. The Panthers failed to get the two-point conversion.

Southampton scored with 3:40 left in the quarter on a 2-yard run by 5-foot-8 sophomore Jerry Wright. Senior Shaquille Johnson kicked the extra point, giving the Indians a 7-6 lead.

With 9:19 left in the second quarter, Lee scored on a 7-yard run. Kicker Ben Arbino got the extra point.

For the last score in the first half, Arbino kicked a 28-yard field goal, give the Panthers a 16-7 lead.

The Indians scored first in the second-half when Nixon tossed a 9-yard pass to sophomore Tonee Hill with 8:22 left in the third quarter. The extra point was good.

Bruton scored the last touchdown of the game with 6:01 left in the third quarter on a 13-yard run by Burks. Arbino’s kick was good to give the Panthers the win.

Southampton had three fumbles, losing each one of them. Bruton had five fumbles and lost two.