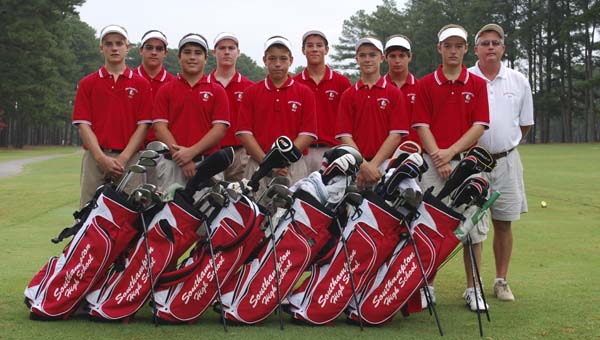 COURTLAND—Southampton High School Head Golf Coach Bob Woulf is working with a young team that he believes can finish in third or fourth place in the Southside District.

“We have a very young team made up of mostly ninth- and 10th-graders, led by 10th-grader Billy Britton and the only senior, Trevor Andre,” Woulf said.

Woulf said he expects other team leaders to be TC Cobb, Josh Riddick, Tyler Peck and Jordan Francis, and expects the team’s toughest opponents to be Powhatan and Park View.

During the Indians’ recent district home opener at Cypress Cove Country Club, Southampton High finished fourth with 372. Bluestone and Powhatan tied for first with team scores of 326 and Park View was third with 346; Nottoway, fifth with 386; Prince Edward, sixth with 441; and Greensville, seventh with 480.

The medalist for the tournament was Kyle Colgate from Bluestone High School, who finished with an individual score of 77.

The Indians are getting ready for the District tournament on Sept. 28 at Mill Quarter Golf Course in Richmond.