Ready for some football? 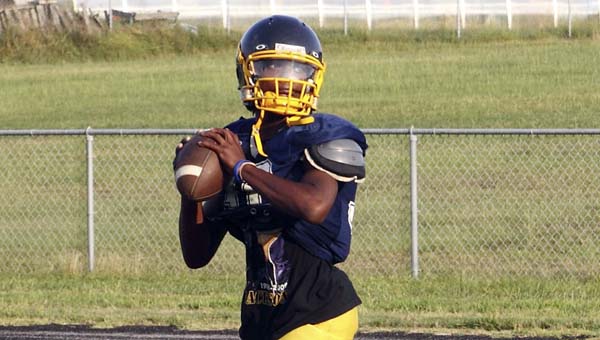 Kickoff is at 7 p.m. at Armory Stadium.

Last year’s quarterback, senior Trey Kegler, will start again for the Broncos, who were 8-2 last season.

Backup quarterback will be senior Melkyan Mitchell, who played last year in that position as well as tailback.

Parker said he has a “host” of players in running back positions.

“If I had to start naming them, you would have a long sheet,” he said. “It’s great (having so many). We run a very fast-paced offense.”

Parker expects Smithfield to be tough, but he always plans to win.

“They are a very well disciplined team and the staff runs a great program,” he said. “They have a lot of size and athletic ability. This will be a great scrimmage.”

“We had a competitive game with them last year,” said Head Coach Dale Marks. “I know they lost some key seniors, but I’m not sure if they got any new kids.”

Marks says his Raiders, who started camp on Aug. 2, are ready.

Sophomore newcomer Rashodd Maxy, who moved here from Blacksburg, and junior Wesley Barnes will share the

“They’ve both been working out at quarterback,” Marks said. “It’s really just a toss up. Wesley is a little quicker than Rashodd, but Rashodd has more size.”

On defense, 5-foot-10, 193-pound senior Will Edwards will start at middle linebacker.

“Will has been one of the harder hitters,” Marks said.

“They’ve recruited in a new quarterback, and their offense has got some veteran players on the team,” Chapman said. “Besides that, they are in a higher division.”

Chapman, who has led the Chargers to five state championships and a 117-69 record during his 17 years at the helm, has a younger, more inexperienced team this year. He lost eight seniors to graduation from a team that was 11-1 last season, and only has three seniors on this year’s squad.

“I expect him to be successful,” Chapman said. “Nerves might come into play. He knew (he would be playing) and did everything in the off-season that I could ask of him.”

Running the ball will be 6-foot, 190-pound senior Charles Keyt. Five-foot-11, 185-pound junior Greg Chaffer will be in the fullback position.

Keyt and Chaffer also will serve as linebackers. Other linebackers, who have limited playing time, will be 5-foot-8, 190-pound sophomore Zeb Warnick and 5-foot-11, 185-pound junior Georgie Smith.

“We’re gonna be ready,” Chapman said. “Coming to Isle of Wight is always tough for any team. Our home fans are fanatical. We have a great home base.”

Teresa Beale, left, John Beale, Connie Corbitt and Charlie Corbitt, all of Franklin, were the first place winners in the... read more