CAPRON – Calvin Richard Lucas, known to many as “Luke” departed his life on Jan. 6, 2023. He was born on Feb. 3, 1933 to Alvin Eugene Lucas and Madeline Rollins Lucas of Monessen Pennsylvania. 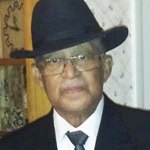 Calvin attended and in 1952 graduated from Monessen High School in Monessen, Pennsylvania where he was a star football player and athlete. Luke met the love of his life, Vivian Claud in 1957 and they married in 1958. He was the love of her life, her best friend and as everyone knew, her main squeeze. They were truly blessed with two daughters, the Rev. Vicki Lucas Black and Laurel “Shelly” Lucas Wood.

After his retirement, he worked at Best Products and later relocated to Capron, Virginia where he worked and retired at Southampton Correctional Facility. Luke was a member of Pleasant Plain Baptist Church in Drewryville, where he served on the trustee board and the cemetery committee. He was a member of the American Legion in Franklin and was also affiliated with the Nottoway Indian Tribe of Virginia.

He was a Pittsburgh Steeler fan like no other and everyone knew not to challenge him about his team. He was also the epitome of a God-fearing Christian man and loved his family unconditionally. He liked to keep busy and always had a project.

On Thursday, Jan. 12, 2023, a public viewing will be held at the funeral home from 3 – 7 p.m. A celebration honoring Mr. Lucas’ life will be held at noon on Friday, Jan. 13 at Move of God Ministries, 221 South Main Street, Franklin, with the Rev. Louis Collins delivering the eulogy; Apostle Tyrone Hart is the pastor. The committal and benediction will be held in Pleasant Plain Church Cemetery, the date and time will be announced later. Masks are required at all services. Service provided by the professional and caring staff of Wm. M. Johnson & Sons Funeral Home Inc., 224 South Main Street in Franklin. Please share your condolences with the family at wmjohnsonandsons.com.