RICHMOND – Frances Anne Beale Goode, passed away on Christmas morning, Dec. 25, 2022, with her children by her side. Frances Anne was born in her parent’s farmhouse on Aug. 20, 1925, in Holland, Virginia. After graduating first in her class from Holland High School, she went on to graduate from Westhampton College at the University of Richmond in 1946 and a year later received her Masters in Library Science from the University of North Carolina at Chapel Hill. 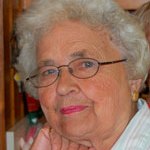 Frances Anne worked in Winston Salem for a short time before coming to Richmond to work as a children’s librarian at the City Library. In 1953, she married David O. Goode Jr. and stayed at home to raise three children. As her children became older, she worked part time as a children’s librarian in the County of Chesterfield and eventually went full time as director of Children’s Services for the Chesterfield County Library system until her retirement. After retirement, she spent the next 10 years as a tour guide at St. John’s Episcopal Church, delighting young and old on the history of Patrick Henry. She loved children’s books and was often a storyteller in the library system and the Richmond schools during the school year and at various organizations who requested her stories during the holiday seasons.

Frances Anne was very active in the Richmond Story League, The Chesmond Woman’s Club, Berryman United Methodist Church and Westover Hills United Methodist Church. She loved playing bridge for over 50 years with the same friends twice a month. Her love of learning and travel culminated with a trip to the Holy Land at 80 years young. Frances Anne spent the past seven years living at the Hermitage in Richmond and considered it her “home.”

Frances Anne was predeceased by her husband, David Oliver Goode Jr.; her parents, Bernice and William Emory Beale; her stepmother, Irma Vaughan Beale; her sister, Rebecca Caroline Beale; and a special cousin, Katherine Beale Godwin, who was raised in her home and who she considered a sister. She was also predeceased by her son-in-law, B. Leigh Drewry Jr. She is survived by three children, Anne Drewry of Lynchburg, Thomas E. Goode (Missy) of Richmond and David B. Goode (Betsy) of Virginia Beach; six grandchildren, Robert and Rebecca Drewry, Emmy and Joe Goode and Oliver and Mary Ann Goode. She is also survived by her brother-in-law, William E. Goode Sr. (Eleanor); and a nephew and niece. A special thank you to Sonya Scott for her many years as a friend and caregiver.