STONY CREEK – Matt Duane Burgess, 65, passed away on Dec. 17, 2022 in St. Mary’s Hospital. He was predeceased by his father, Roland Atlas Burgess. 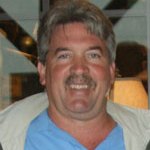 Duane was a cabinet maker instructor for Greensville Correctional Center and grew up in Vincent’s Gove United Methodist Church. He was a member of South Hill Masonic Lodge No. 297 AF&AM and was an Eagle Scout.

A funeral service with Masonic Rites will be held at 2 p.m. on Wednesday, Dec. 21 in Wright Funeral Home in Franklin with the Rev. Mike Harrington officiating. Burial will follow in Riverside Cemetery in Courtland. The family will receive friends from 6 – 7:30 p.m. on Tuesday in the funeral home and also one hour prior to the service and suggests that in lieu of flowers memorial donations be made to the American Cancer Society.