FRANKLIN – Hunter Darden Jr., 100, passed away Dec. 14, 2022 in his home with family by his side. Born and raised in Southampton County, he was a son of the late Hunter Darden Sr. and Sallie Lankford Darden. He was also predeceased by his wife of 74 years, Jean Howell Darden; two sisters, Dorothy D. Cotton and Louise D. Vaughan; three brothers, Harvey Darden Sr., Thomas I. Darden and Charles B. Darden; a sister-in-law, Phyllis Mewborn; and a daughter-in-law, Kathy Darden. 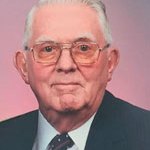 Hunter was a graduate of Franklin High School and a retired farmer who always had a love of the land and enjoyed his rural family life. He was a lifetime member of Sycamore Baptist Church where he served as a trustee for over 30 years as well as a deacon and Sunday school teacher and member of different committees. He was a member of Forks of the River Hunt Club.

He served in the Army field artillery in Europe during World War II and later in the Virginia National Guard.

Hunter was a charter member of the Forks of the River Ruritan Club and served a term as Lt. Governor of the Holland District. He served 25 years on the Board of Directors of Southampton Memorial Hospital and was a founding member of the Board of Directors of the former Bank of Franklin. He was a 75 plus year member and past master of the Franklin Masonic Lodge and 72 plus year life member of Khedive Shrine Temple of Norfolk. Hunter served two elections as president of the Virginia Peanut Growers Association and two times as president of the Peanut Growers Cooperative Marketing Association and a term on the board of the National Peanut Council.

A funeral service will be held at 2 p.m. on Saturday, Dec. 17 in Wright Funeral Home with the Rev. Tracey Pugh and the Rev. Dr. Reginald Warren officiating. Burial will follow in Poplar Spring Cemetery. The family will receive friends one hour prior to the service in the funeral home and suggests that memorial donations be made to Sycamore Baptist Church.

The family would like to thank Mr. Darden’s special caregiver, Elizabeth Del Vecchio and the Amedisys Hospice Team.