FRANKLIN – Jean Dismukes Clark, 94, widow of Carl Vernon Clark Sr., passed away Dec. 9, 2022 at Commonwealth Senior Living of South Boston. Jean grew up in Montgomery, Alabama, and was a daughter of the late Lewis Leon Dismukes and Mary Thelma McLeod Dismukes. She was also predeceased by two sisters and a brother, Mary Hazel Hundley, Sally D. Ford and Lewis Dismukes.

Jean was a retired flight attendant for Eastern Airlines 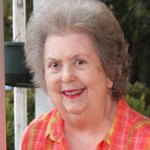 and a former secretary for the United States Air Force. She was a member of High Street United Methodist Church, Franklin Garden Club and the Franklin Christian Women’s Club.

A funeral service will be held at 2 p.m. on Tuesday, Dec. 13, 2022 in Wright Funeral Home with the Rev. Hoyle Green officiating. The burial will follow in the New Annex of Poplar Spring Cemetery off of Homestead Road. The family will receive friends at the funeral home one hour prior to the service and suggests memorial donations be made to the Commonwealth Senior Living Employment Fund, 435 Hamilton Boulevard, South Boston, VA 24592.