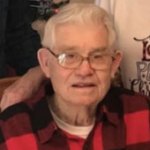 patriarch of his family, being committed to his family, his profession and his community. He was graduate of Isle of Wight School class of 43’. He was very athletic and very competitive. In high school he played basketball, baseball as both a pitcher and a catcher and also excelled in track. He was a lifelong New York Yankees fan. He was the owner and operator of Crocker Farms. He served as the president of Isle of Wight Farm Bureau for 15 years.

During that time, he worked on many state committees and as a delegate to numerous national conventions. He was a life-time member of Central Hill Baptist Church, where he served as a Sunday School teacher, Royal Ambassador leader, choir member and cemetery trustee. He also served as a deacon and after 50 years of faithful service was made deacon emeritus. John was moderator of the Blackwater Association for two terms. He served two terms on the Virginia Baptist Mission Board Budget Committee. He was a member of the Isle of Wight Ruritan Club for more than 50 years. He served as secretary, president and board member.

He had a warm personality that brightened up the room and endeared him to many people, he never met a stranger. He is predeceased by his wife, Betty Anne Harrison Crocker; his sister, Susie Pearl Crocker Jones Kalista; two brothers, Alfred E. and the Rev. James B. Crocker.

A funeral service will be held on Thursday, Dec. 1, at 11 a.m. at Central Hill Baptist Church with burial to follow in the church cemetery. The family will receive friends on Wednesday evening from 6 – 7 p.m. at Littles Funeral Home, Smithfield. His heart was at Strawberry Plains Farm where he was raised. In lieu of flowers the family suggests donations be made to the Central Hill Baptist Church Cemetery Perpetual Care Fund, c/o James E. Crocker, 10225 Central Hill Road, Windsor, VA 23487.

Online condolences may be registered at www.littlesfuneralhome.com.