NEWSOMS – Jane Ellen Holloman Vick, 93, passed away on Nov. 21, 2022. Born to James Robert Holloman and Eunice Catherine Cook on June 24, 1929, she lived in the same home on her family’s century farm of Newsoms since the day she was born. 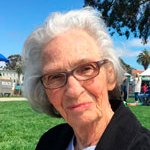 A beloved wife, mother, sister, daughter, grandmother and great-grandmother, she spent most of her life as a caregiver to those she loved, namely her mother, father, sister, husband, children and grandchildren. Jane graduated from Newsoms High School and went on to attend Madison College before marrying and becoming a mother to her son, Milton Franklin Vick Jr. (Tim) of Murfreesboro, North Carolina and then her daughter, Pamela Vick Leaf (David) of Richmond. She was a loyal member of Newsoms Baptist Church, a church that her great-grandfather helped found.

Jane Ellen prided herself on being independent until the day that she died, cutting her own grass until the age of 87. She was known as an adopted mother and grandmother to many over the years, and as one of the few left in her generation, claimed to be “living on borrowed time.” She loved to piddle and was always crocheting, sewing and painting. Jane Ellen loved a good challenge and while she was readily dressed to the nines, she was a bit of a tomboy as a girl, following her daddy around wherever he went on their farm.

She leaves behind a legacy of humility and strength to her three other grandchildren, Matthew Franklin Vick of Charlotte, North Carolina; Katherine Leaf Vaughan (Ben) of Richmond; Rebecca Leaf Martin (Phillip) of Summerville, South Carolina; and her great-granddaughters, Charlotte Belle Vaughan and Elizabeth Jane Vaughan of Richmond.

A graveside service will be held to celebrate her life on Thursday, Dec. 1, at 1 p.m. at Hollywood Cemetery on Old Chapel Road in Newsoms. Donations may be directed to Newsoms Baptist Church in her memory.