FRANKLIN – Roger Melvyn “Poppy or Pop” Milliken Sr., 92, passed away on Nov. 18, 2022. He was born in Tennessee and as a teen moved to Maryland. Roger enlisted in the U.S. Air Force, then asked his girl, “Will you wait for me?” and she said “No way!” Well, he wasn’t a stupid man, so he said, “Will you marry me?” and she said “Yes!” So, they got married and she waited. Over the years they raised three kids and later moved the family to Virginia where he ended up retiring as a wel 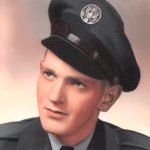 der. Roger never knew a stranger, loved to talk and tell stories, give and receive hugs, fish and golf.

He was a member of Grace Lutheran Church in Courtland and J.L. Camp YMCA in Franklin where he enjoyed many hugs from “the girls at the Y” oh… and we think the exercise too.

A memorial service with military honors will be held at Grace Lutheran Church for family and friends on Nov. 26, at 11 a.m. with Pastor Kay Hute officiating.