NEWSOMS – Glenda Griffin Worrell, 61, passed away on Nov. 19, 2022 after a long battle with cancer. Born on June 15, 1961 in Roanoke Rapids, North Carolina, she was a daughter of the late Arnold Benjamin Griffin and Irene Callahan Griffin. She was predeceased by her husband, Richard Henry “Rick” Worrell III. 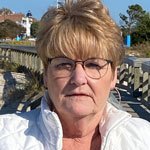 Glenda was a graduate of Southampton High School and worked a total of 46 years with the general public starting at 15 years 8 months old. She worked for Thornton Livesay Furniture (Heilig-Meyers) for 23 years, 5 years for Public Finance (Citi Financial) and 18 years in the City of Franklin Treasurer’s Office. Glenda was brought up in St. Jude Catholic Church.

A memorial service will be held at a later date.