CAPRON – Paul Daniel Cox, 85, passed away Nov. 18, 2022 in his home surrounded by his family. Dan was a native of Sussex County and was a son of the late Junius Brownley Cox Sr. and Audrey Williams Cox. He was also predeceased by his wife, Nancy Crichton Cox and two brothers J. Brownley Cox Jr. and Thomas David Cox and a great-grandson, Matthew Curle. 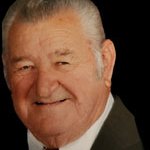 Dan was an Army veteran and a retired supervisor in the maintenance department for the Virginia Department of Corrections. He attended Capron United Methodist Church.

A memorial service will be held at 7 p.m. on Wednesday, Nov. 23, 2022 in Wright Funeral Home with William Hart Gillette officiating. The family will receive friends at the funeral home one hour prior to the service and suggests memorial donations be made to Capron United Methodist Church or American Cancer Society.