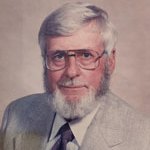 A graveside service will be held at 11 a.m. on Monday Oct. 31 at Riverside Cemetery in Courtland. The family will receive friends from 6 – 8 p.m. on Sunday in Wright Funeral Home in Franklin and suggests memorial donations be made to Southampton Academy or Walter Cecil Rawls Library.

The family would like to thank all of Graham’s caregivers.

“If I’d have known that I was going to live this long, I would have taken better care of myself.”