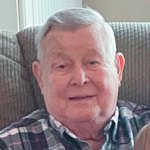 Lin joined the U.S. Navy in 1951 during the Korean War. He was part of the maintenance division within VP-28 Patrol Squadron and was stationed in Hawaii and Okinawa, Japan. They flew combat missions toward Shangri River in China and patrolled as far south as the area between China and Taiwan. As an air crewman his combat station was the aft upper gun turrent and Lin flew 32 combat missions in total for which he received the Air Medal. Lin retired from the Navy after 20 years of service as senior chief.

After his retirement Lin worked at Naval Air Depot for 20 years. Lin had his private pilot’s license and he had owned several airplanes.

Lin was a member of Masonic Lodge No. 151 in Franklin, Portsmouth Shriners, American Legion and Sgt. Jayton D. Patterson VFW No. 4411.

A funeral service with full military honors and VFW honors will be held at 2 p.m. on Tuesday, Nov. 1 in Wright Funeral Home. Burial will be held at Albert G. Horton Jr. Memorial Veterans Cemetery at a later date. Following the service, a reception will be held at the Sgt. Jayton D. Patterson VFW Post No. 4411, 3385 Beaver Dam Road in Franklin. In lieu of flowers, the family requests that memorial donations be made to the VFW Post No. 4411.