FRANKLIN – Horace Stanley “Tommy” Sykes Sr., 87, passed away Oct. 2, 2022 in his home with family by his side. Born in Franklin, he was a son of the late Edward Butler Freeman Sykes and Dora Alice Jones Sykes. He was also predeceased by two sisters, Myrl Davidson and Dora Mae Lynn; four brothers, Edward, C.J., Buddy and Norwood Sykes and a son-in-law, Rob Councill. 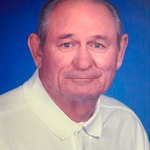 Tommy was a roll finishing supervisor at Union Camp Corporation with 45 years of service. He was a former National Guardsman for 11 years, a member of Franklin Masonic Lodge No. 151 AF&AM, a former Knight of Columbus and a member of St. Jude Catholic Church. Tommy was an avid New York Yankee fan.

A memorial service will be held at 2 p.m. on Thursday, Oct. 6, 2022 in Wright Funeral Home with Father Emmanuel Mensah and the Rev. Jim Foreman officiating. In lieu of flowers, memorial donations may be made to St. Jude Catholic Church Building Fund.