FRANKLIN – Trustee Napoleon Crocker Sr. of Franklin, Virginia peacefully slept away Saturday, Sept. 24, 2022 at the East Pavilion Nursing Home in Franklin. Napoleon, an only child was born in Franklin on Aug. 12, 1921 and raised by his mother, Mary Etta Crocker. 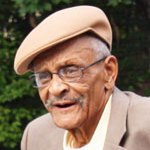 Upon returning from serving his country in World War II, Napoleon continued his employment at the Union Camp Corporation until he became disabled to work. He married Emily Mae (Wright) Crocker in 1949 and to that union they were blessed with five lovely children.

Napoleon accepted Christ and was baptized at an early age and recommitted his life to Christ as an adult, joining Greater Oak Grove Baptist Church. He remained a faithful and active member until approaching the age of 99 when he was no longer able to do so. He has served there in several capacities including as a trustee, trustee emeritus, vacation bible school coordinator and sexton. In his honor, the Greater Oak Grove Baptist Church established the Napoleon Crocker Scholarship.

A celebration of Trustee Crocker’s life will be held at 1 p.m. on Monday, Oct. 3 at Oak Grove Baptist Church, 35441 South Quay Road, Franklin with Pastor Curtis Mitchell delivering the eulogy. His final earthly resting place will be in Quantico National Cemetery scheduled for a later date. In lieu of flowers, please donate to the Greater Oak Grove Baptist Church Napoleon Crocker Scholarship Fund.

Masks are required during all services. Service provided by the professional and caring staff of Wm. M. Johnson & Sons Funeral Home Inc., 224 South Main Street, Franklin, VA. Please share your condolences with the family at wmjohnsonandsons.com.