FRANKLIN – Samuel O. Butler Jr., 97, died on Sept. 23, 2022. He grew up in Isle of Wight County and had been a resident of Franklin since 1948. Sam was the son of the late Samuel O. Butler Sr. and Eulalah M. Butler. He was predeceased by his wife, Giva E. Butler and one brother, Lester Butler. 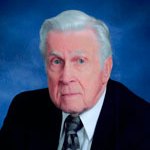 He is survived by his brother, Marvin M. Butler and wife, Edna N. Butler of Franklin. He is also survived by one nephew, Ronald Butler and two great nephews, Kindall and Cole Butler also of Franklin and a very special, loyal and caring friend, Evelyne G. Vaughan.

Sam worked for Union Camp Corporation in the Building Products Division for 43 years, retiring in 1990. He loved to work in his shop making various wood work projects for friends, neighbors and family.

Sam was a Navy veteran of World War II with the rate of Gunner’s Mate 3/C.

A memorial service with Masonic Rites and military honors will be held at Wright Funeral Home in Franklin on Tuesday, Sept. 27, at 11 a.m. Burial will be private at Southampton Memorial Park. Following the service a reception will be held at High Street United Methodist Church Fellowship Hall.

In lieu of flowers, memorial donations may be made to the American Cancer Society or High Street United Methodist Church General Fund. Sam wanted to thank Steve Cole for being a loyal and dedicated friend.