FRANKLIN – Elaine Elsam Flippo, 89, passed away on Sept. 15, 2022. Born in the Veedersburg parsonage of the First Christian Church in Indiana, where her father, the late Chaplain Col. Harold Gordon Elsam (U.S. Army Ret.) served as the pastor along with his wife, Lucille Salisbury Elsam. 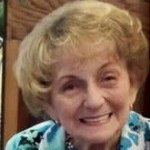 She spent most of her younger years in Illinois and Indiana. Elaine was the classic ‘middle child’ and is survived by her older sister and younger brother. She graduated from Radford College, which was the Women’s Division of VPI (Virginia Tech) at the time, where she majored in art. She was on the VPI Homecoming Court and it was at VPI in Blacksburg that she met and then married her roommate’s brother, the late Col. Charles Flippo, (USAF Ret.). They enjoyed the military life, raising four children while they lived and traveled all over the United States and Europe until his retirement, at which time they moved to a farm in Christiansburg. It was at this time that she decided to start her career as a secretary at the Virginia Tech Athletic Department, where she worked for 30 years until the age of 73. She loved her job as she worked tirelessly for the VT coaches and doctors. She loved getting to know and help all the student athletes that came to see her. She was always described as the sweetest and kindest person by all that met her.

Elaine enjoyed shopping for antiques, thrifting, finding collectibles and had a rock collection from the places that she traveled. She also had an extensive goat collection because of her Capricorn birthday that will be passed down to another lucky Capricorn. She was a very talented artist with an eye for beautiful paintings and artwork. She was very creative and loved to paint, craft and sculpt. She grew up during the depression and consequently was always frugal with her money, but she always had enough for a good glass of wine.

The family would like to thank all the wonderful doctors and caregivers at The Village at Woods Edge, Southampton Memorial Hospital and East Pavilion Long Term Care for their tireless efforts, especially during the extremely difficult COVID years.

A private, family celebration of life will be held at a later date. The family suggests that memorial donations may be made to the East Pavilion Discretionary Fund, 100 Fairview Drive, Franklin, VA, 23851 or any favorite charity.